Team Israel infielder Mitch Glasser penned this tribute to teammate Blake Gailen based on the famous “Casey at the Bat” poem written by Ernest Lawrence Thayer (1863-1940):

Gailen at the bat 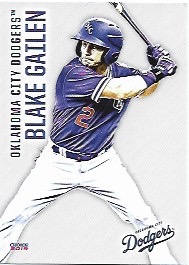 The outlook wasn’t brilliant for the Israeli nine that day:
The score stood four to two, with but one inning more to play,
And then when Kelly died at first, and Paller did the same,
A pall-like sheket fell upon the patrons of the game.

A straggling few got up to go in deep despair. The rest
Clung to HaTikvah which springs eternal in the human breast;
They thought, “If only Gailen could but get a whack at that—
We’d put up even shekels now, with Gailen at the bat.”

Tal Erel preceded Gailen, as did Lowengart,
both young promising Sabras, a rally hoping to start;
So upon that stricken multitude grim melancholy sat,
For there seemed but little chance of Gailen getting to the bat.

And Erel let drive a single, to the wonderment of all,
And Assaf, the loved sportai, tore the cover off the ball;
And when the schmutz had lifted, Peter Kurz saw what occurred,
There was Assaf safe at second and Tal a-hugging third.

Then from five thousand throats and more there rose a lusty kvel;
It rumbled through the Golan, it rattled in the dell;
It pounded on the Sinai and recoiled upon Eilat,
For Gailen, mighty Gailen, was advancing to the bat.

There was ease in Gailen’s manner as he stepped into his place;
There was pride in Gailen’s bearing and a salty sameach lit Gailen’s face.
And when, responding to the mishegas, he lightly doffed his kippa
No stranger in the crowd could doubt ’twas Gailen at the bima.

Ten thousand oy’ny’eem were on him as he rubbed his hands with dirt;
Ten thousand yadayim applauded when he wiped them on his shirt;
Then while the writhing pitcher ground the ball into his hip,
Chutzpah flashed in Gailen’s eye, a sneer curled Gailen’s lip.

And now the leather matzah ball came hurtling through the air,
And Gailen stood a-watching it in haughty grandeur there.
Close by the sturdy batsman the ball unheeded sped—
“That ain’t my schtick,” said Blake. “Strike one!” the umpire said.

From the benches, black with anashim, there went up a muffled rar,
As loud as on Rosh Hashana the sounding of the shofar
“Kill him! Kill the umpire!” kvetched Valencia from the bench;
And it’s likely he’d have killed him had not Gailen been a mensch.

With a smile of Jewish tzedakah Gailen’s visage shone;
He stilled the rising ruach; he bade the game go on;
He signaled to the pitcher, and once more the baseball flew;
But Blake still ignored it and the umpire said, “Strike two!”

“Shlemiel!” cried the plotzed thousands, and echo answered “Oy gavult!”
But one scornful look from Gailen and the audience was awed.
They saw his punim grow stern and cold, they saw his biceps strain,
And they knew that Blake wouldn’t let that ball go by again.

The sneer is gone from Gailen’s lip, his teeth are clenched in hate,
He pounds with cruel violence his bat upon the (seder) plate;
And now the pitcher holds the ball, and now he lets it go,
And now the air is shattered by the force of Gailen’s blow.

Oh, somewhere in this Chosen Land the sun is shining bright,
The klezmer is playing somewhere, and somewhere hearts are light;
And somewhere men are at shul, somewhere kids are having fun,
Israelis watching anxiously – mighty Gailen has hit a …