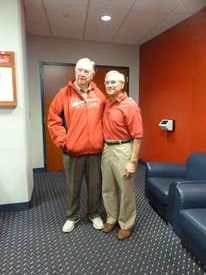 Since 1973, lifelong St. Louis Cardinals fan Harvey Tettlebaum has lived on a 276-acre farm 22 miles west of Missouri’s capital of Jefferson City. There, he raises corn, soybean and wheat, while working as a lawyer handling health-care regulatory issues for clients dealing with state government agencies.

One way his daughter, Marianne, the executive director of the Jewish Federation of Arkansas, passes on the family’s baseball loyalty is by dressing her four-year-old daughter, Thalia Stuber, in team red. A love of baseball, after all, had seeped into Marianne and her brother, Benjamin, through Cardinals broadcasts at home and by attending games on their birthdays with Tettlebaum and his wife, Ann. While fandom tradition is common in sports, this family’s initiation was not. That’s because nearly a century ago, Tettlebaum’s immigrant grandparents opened businesses opposite Sportsman’s Park, then home to St. Louis’s major league teams, the Cardinals and the now-departed Browns. And that’s what ignited young Tettlebaum’s love of baseball.

Working across from Sportsman’s Park meant “seeing the business aspect” of baseball.

Esther Schimmel, Tettlebaum’s grandmother, “used a tong to pick up the hot dogs, but wouldn’t put her hands on them because they were treif.”

Maybe you heard of a film a quarter-century ago – about another farmer with cornfields. He carved out a baseball diamond. Ever been tempted?

Tettlebaum: Field of Dreams! No, I’ve never been tempted to build a baseball diamond in the middle of my cornfield.

But let’s say you were to do that. In Field of Dreams, Shoeless Joe Jackson, Mel Ott and the others stepped out from the corn stalks and onto the ballfield. Who would march onto your field of dreams?

Has your family played ball on the farm?

Oh, sure. Our farm is bisected by a spring-fed creek. On the house side of the creek are pastures where I used to have cattle. We’d mow the field, and my son, Benjamin, and I would go out and play catch or I’d hit balls to him from the time he was seven, eight years old. He was fairly serious about it for a while. He’d have friends out, and they’d play on that field. He went to [former major-leaguer] Mickey Owen’s baseball camp, near Springfield, MO.

Your family’s five-generation connection to Major League Baseball began unconventionally: with the hot dog stand your grandmother, Esther Schimmel, owned across from Sportsman’s Park. How did that come about?

My grandmother had come over from Poland around the turn of the last century. Her husband, Harry Kantner, died in the flu epidemic; the name had been Katevoushnik. Her maiden name was Schletsky.

They had two children: my mother, Sylvia, and her brother Phillip. They lived on Grand Avenue near a nursing home: the Jewish Orthodox Old Folks Home. He’d been a jeweler, and she didn’t know anything about it, so she started a millinery shop and also did sewing. They lived next door to a Catholic church, so she sewed the habits of the nuns. She was fixed up with a Jewish gentleman named Louis Schimmel, from Germany. She married him, and they had one son: Morry. Lou bought a house on the corner of Spring and Dodier Avenues, across the street from Sportsman’s Park, and he’d park cars on the property. The house burned down. Lou leveled the property and put gravel on it and used all of it as a parking lot. Now he had a lot more room and could fit 50-60 cars. My grandmother had him build a hot dog stand on the corner of the lot. This was about 1927.

They were an interesting couple: He kept his money from the parking lot, and she kept her money from the hot dog stand. My grandmother was a really smart businesswoman. The hot dogs she sold weren’t kosher, but they were all-beef hot dogs. It was a very high-quality product. She was Orthodox. She didn’t touch the hot dogs. She used a tong to pick up the hot dogs, but wouldn’t put her hands on them because they were treif. She didn’t work Shabbos: the Friday night and Saturday games. She had employees [work instead]. She was very religious. We used to walk to shul together every Saturday morning.

I started working down there when I was 11. I would collect money for the cars. It was the closest lot to the ballpark, right across from the owners’ lot and the press lot, right behind home plate, so it would fill up first. Consequently, her hot-dog stand would do a terrific business. I would help her sell hot dogs, soda and candy. When the game started, things would calm down and we’d restock the coolers. We’d buy block ice and use an ice pick to break up the chunks. I still have the Coca Cola ice pick and her Coca Cola jacket.

When the game got out, people would buy the products again. The players would come out, too. It was a neighborhood ballpark, like Wrigley Field and Fenway. There wasn’t any special parking for the players. A lot of them parked on our lot. I remember [infielder] Red Schoendienst would buy hot dogs on his way home from the game. He’s 92, and still goes out and hits fungoes before games [as a Cardinals coach]. I saw him before a game this year and told him, “When I was a little boy, I used to serve you hot dogs.” He remembered the hot dog stand.

In those days, the owners were unbelievably cheap. The ballplayers, to eat between games of doubleheaders, would send the Andy Frain ushers out to my grandmother’s hot-dog stand. I would bring the hot dogs to the players’ entrance to give to the players. Those were different times.

How did it impress you to be in that environment?

I was there all the time, so when you’re that familiar with what’s going on, it doesn’t impress you as much as when you occasionally go to a ballgame. You’re seeing the business aspect of it. I was a tremendous baseball fan and Cardinal fan, but there wasn’t as much magic to it because I was so close to it. I’d go into games, but most of the time I was outside.

In most of the country today, baseball is still really a family business. The Cardinals are still a family business. Everybody kind of knows everybody. Having been there as many years as she was, she knew everybody. If I wanted to go to the game, my grandmother took me there and I went in. But most of the time, I wasn’t interested. I was there to work. I was being paid. I think my grandfather paid $1 a day, which, for a kid in the early 1950s, was okay. Most of the time, I saved the money. We didn’t have a lot of money.

I remember going to more Browns games when I was really young, because the Browns were so awful that they’d give tickets away at the elementary schools.

A: I thought it was fun. Customers would ask for a hot dog. The condiments were there on the counters, on the south and east sides. They’d either take the hot dogs into the ballpark, or stand and eat them there.

Did your love of baseball start there or before?

My dad was a huge baseball fan. The Cardinals had a huge following, in part because of KMOX radio and because they were the westernmost and southernmost team. They had a huge fan base. People would come in on buses from Mississippi and Louisiana and Georgia and Texas and Arkansas and Oklahoma. People would come up for a weekend. The buses would stop on our street and we’d see people get off. They’d buy hot dogs from my grandmother.  I worked there until the fall of 1960, when I went away to college. I’d come back in the summers to help out, until the Cardinals moved downtown in 1966.

What happened to the businesses when the Cardinals moved?

Carter Carburetor Company [across Spring Avenue] saw an opportunity to buy the lots so they’d have a place for their employees to park their cars. They hired Duke Realty, which approached my grandmother, on behalf of an undisclosed principal, to buy the lots. She said, “I don’t sell; I only lease.” They came back and said, “We talked to our principal, and we’ll lease – but it’s got to be a 10-year lease.” She said, “Fine, but I want a 10-year option: 10 plus 10.” They agreed. It was a negotiation that went on for months. The amount of money my grandmother received for those leases for that 20-year period was many multiples of the original offering price of the lot. She made a huge amount of money. She was so shrewd, such a good businesswoman.”

What eventually became of the lots?

Carter Carburetor went out of business, and I think ended up donating the lots to the boys’ club [on the stadium site].

Your story is such an interesting intersection of two American institutions: business and baseball.

You had this microcosm of American society. It was capitalism right there. You had Carter Carburetor, a large national company; Anheuser Busch brewery, a big, big company, which owned the team; and my grandmother. [It was] the sort-of leveling influence of the sport. The people who parked in my grandfather’s lot were the major people of St. Louis society. They would talk business. The story that intersects baseball and my grandfather best was the Wally Moon story. Wally Moon was the Rookie of the Year, with the Cardinals in 1954. He drove his Cadillac into the lot and he said, “I’ll park my Cadillac on your lot if you give me a special deal,” because he thought he was big stuff. My grandfather said, “Your Cadillac takes up too much room. I don’t want your Cadillac on my lot.” I’m standing there watching this. Wally Moon leaves, and I say to my grandfather, “That was Wally Moon.” My grandfather says, “I don’t care who he is. His car’s too big!”