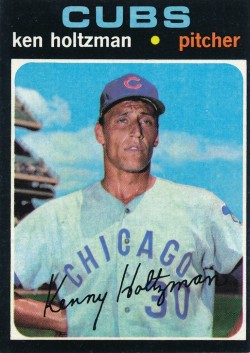 It is funny the things you remember when you were a kid. No matter how the wiring in the brain gets frayed, there are indelible images that time can’t touch.

Kenny Holtzman’s first no-hitter was one of those memories for me. Not only was it a huge sports moment in my early evolution as a fan, but it was one of the first times I could remember having a keener sense of a Jewish identity.

Baseball has a way of doing that for you.

Aug. 19, 1969 was a sunny Tuesday in Chicago. Holtzman took the mound against the Atlanta Braves in Wrigley Field. Those Braves were a hard-hitting bunch. The lineup featured Rico Carty and Felipe Alou, two terrific hitters. There was future Hall of Fame Orlando Cepeda. And of course, the great Hank Aaron, still going strong at 35.

That Braves team would seem to be a unlikely victim of being no-hit.

Holtzman, though, always took no-hit stuff to the mound. Only 23, the young left-hander was coming into his own as a key starter on the ’69 Cubs.

As for me, I was just over a month away from my 10th birthday. My sports obsession already was in full throttle.

Since my father was a White Sox fan, I followed suit. So I can’t say I was obsessed with rooting for the Cubs during that fabled year. In fact, my first byline in a newspaper occurred when a letter we wrote to a Chicago Daily News columnist got printed that summer. We made up silly nicknames mocking the Cubs. It was mostly juvenile stuff, but hey I was 9, and my name was in the paper. A forerunner of things to come.

However, even though I was a Sox fan, I identified with Holtzman. I’m Jewish. He’s Jewish. I knew there weren’t many Jewish players in baseball. While I was aware Sandy Koufax, I was too young to recall any of games. So Kenny Holtzman was it for me.

I can’t remember if we watched the entire game that day. I’m sure countless Cubs fans will say they consumed every minute. But really how many of them actually did, considering it was a Tuesday afternoon?

At some point, it kicked in that Holtzman had a no-hitter going. I believe fabled announcer Jack Brickhouse never used the term no-hitter during the telecast for fear of jinxing Holtzman’s bid. If memory serves correct, he called it “one of those things.”

Holtzman wasn’t necessarily dominating the Braves. In fact, it was the rare no-hitter without a strikeout.

The suspense built as Aaron came up to lead off the seventh. Holtzman hung a pitch that got too much of the plate, and Aaron did what he did best. He sent a high drive that seemed destined for the leftfield bleachers. There goes the no-hitter.

However, there was a funny thing about that day. Usually, the wind blows out at Wrigley during hot summer days. But on that Tuesday, it actually was a bit cool with temperatures only in the low 70s. As a result, the wind was blowing in from the lake.

Aaron’s ball hit that invisible wall, producing the vivid shot of Cubs leftfielder Billy Williams catching the ball with his back up against the wall. The no-hitter still was on.

When the ninth inning rolled around, a full house at Wrigley Field was going crazy. And so were we in front of our black-and-white TV. With two outs, the mighty Aaron came up again. We held our breaths, but Holtzman wasn’t going to make the same mistake again. Aaron hit a weak grounder to second baseman Glenn Beckert.

We did the same thing at home, celebrating this incredible achievement.

It was the first no-hitter I can recall seeing, and it was performed by my Jewish baseball hero. I just recall that overwhelming sense of pride. As my sense of identity was being molded, I felt more Jewish in that moment.

Yep, baseball has a way of doing that to you.

Ed Sherman is the managing editor of Jewishbaseballmuseum.com