Many thanks to Malka Margolies for sharing this lovely story about her late father and Jackie Robinson. Rabbi Morris B. Margolies recalled a memorable meeting with the Dodgers great in a column for the Kansas City Jewish Chronicle.

In 1955, I was serving a congregation in Manhattan Beach, a lovely ocean-front section of Brooklyn, N.Y. My neighbor and good friend, Judge Samuel Lebowitz, lived down the block. He had attained national fame as the lawyer in the famous case of the “Scottsboro Boys,” five African-American lads whom he had successfully defended against murders they had not committed.

In 1955, the New York Yankees and the Brooklyn Dodgers had won the American League and National League pennants respectively, and were to play in one of those rare “Subway Series” in the Yankee Stadium and in Ebbets Field. I wanted to see that series in the worst way but—try as I might—I could not buy seats. Every game had been sold out weeks in advance.

Three days before the series was to start, Judge Lebowitz, like myself an ardent baseball fan, invited me to sit with him in his box for the opener. It was Sept. 28, a gorgeous day for that time of year, with nary a cloud in the heavens. The judge had a box in the front row, right behind the Dodgers’ dugout. For me it was and remains the sports thrill of a lifetime. Two or three yards in front of me was the incomparable Roy Campanella catching warm-up pitches from Don Newcombe and chattering away cheerfully all the while at anyone who would listen. Both Newcombe and Campanella were black, as were Jim Gilliam, Sandy Amoros and Joe Black (who had been traded to Cincinnati before the end of the regular season). One black man, Elston Howard, was the regular catcher for the Yankees. 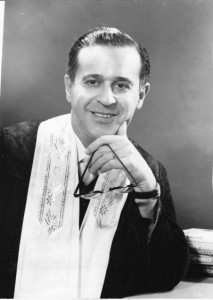 But the man responsible for ending the boycott of black players by the Major League was the man playing third base for the Dodgers. He was, of course, Jackie Robinson, who in 1947 became the first black man to play in the big leagues.

I was busy working away with my movie camera (I still have some 15 minutes of both the pre-game and actual game goings-on). I had a tough time getting a frontal picture of Jackie Robinson as he was taking batting practice. Judge Lebowitz noticed my frustration. As Robinson was coming back to the dugout, the Judge called out: “Hey Jack, come here please. I wancha to meet someone.” Jackie approached and Lebowitz said: “This is my Rabbi. He knows a lot about baseball.”

We shook hands. I said: “Jackie, I want to give a sermon about this World Series Opener and you’re the key to it. Could you please tell me how, after nine years in the majors, you feel about the experience?”

Jackie Robinson answered: “Funny you should ask. You’re a Jewish minister. If I know anything about Jews, I’ll tell you I felt and still feel the way Jews must have felt during thousands of years of discrimination. You took a lot of gaff, but you refused to play dead. Well, I’ll never play dead as long as I’m alive.”

The Yankees won that first game 6-5. At one point, they had led the Dodgers 6-3. But in the eighth inning, that rarest of baseball feats was executed by never-say-die Jackie Robinson. He stole home to bring his team within one run of a tie. The Yankees also won the second game. The Dodgers won the next three and the Yankees tied the series at three apiece when they won game number six. 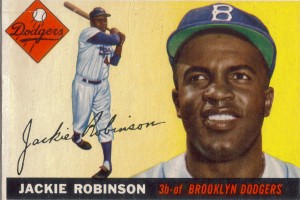 Judge Lebowitz and I were at the decisive seventh game. Left-hander Johnny Podres was throwing  a masterpiece. The Dodgers had the only two runs, both batted in by Gil Hodges. In the sixth inning, star catcher and sometime philosopher of the Yankees, Yogi Berra, hit the ball deep down the left field line with two on and two out. It looked like the Yankees were about to cook the Dodger goose. Out of nowhere came Sandy Amoros to save the game for the Dodgers with a truly spectacular catch. Jackie Robinson jumped up and down third base screaming: “That’ll show ‘em.”

It is 50 years since Jackie “broke the color line” for black players in the major leagues. We have since been blessed as baseball fans to see Willie Mays, Hank Aaron, Frank Robinson, Bob Gibson and Ernie Banks, to name only a handful of African-Americans who left luster to our lives.

He sure showed them.