After being selected in the fourth round of the 2012 draft, Moscot made a quick rise to the big leagues. In 2015, after logging a 7–1 record with a 3.15 ERA for the AAA Louisville Bats, he was promoted to the majors. He made his major-league debut on June 5, at the age of 23. Moscot pitched 5 innings and allowed 4 runs, all coming in the first three innings, as he retired 13 of the last 15 batters he faced. In his next start, he won his first major-league game on June 10. Unfortunately, he suffered an injury to his non-throwing shoulder on a tag play, putting an end to the season after only three starts. He appeared in five games during the 2016 season. 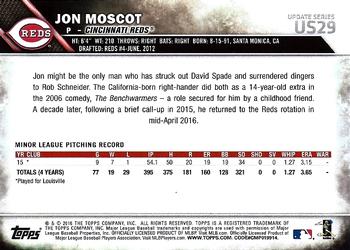 At age 13 in 2006, Jon had a small part in the sports comedy film The Benchwarmers.