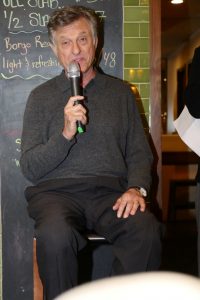 Ira Berkow didn’t write the book on Jews in baseball. No, he wrote the movie.

Berkow authored the script for “Jews and Baseball: An American Love Story.” The terrific 2010 film was narrated by Dustin Hoffman.

Berkow’s word skills, which are considerable, might not have been his most valuable contribution to the movie. Initially, Sandy Koufax, who clings to his privacy, would not consent to an interview.

Berkow, though, knew Koufax well from his days as a Pulitzer Prize winning sports columnist for the New York Times. He made his pitch to the Hall of Famer.

“I wrote him a letter that said, ‘I feel this film is going to be for posterity,” Berkow said.

A week later, the phone rang at Berkow’s house. The caller said, “This is Sandy.”

Berkow initially thought it was his sports editor Sandy Padwe. He didn’t have a warm greeting for “Sandy.”

Berkow recalled he had to quick regroup.

Koufax eventually sat for an essential and compelling interview for the film.

Then again, it would be difficult to turn down Berkow. He built his formidable career on earning trust with his subjects.

Berkow surely is the only person living who knew Hank Greenberg (wrote his biography, “Hank Greenberg: The Story of My Life”), Moe Berg (the mysterious catcher that spied for the OSS during WWII), and the great Koufax.

That makes Berkow more than uniquely qualified to talk about Jews in baseball. He is a 2006 inductee into the International Jewish Sports Hall of Fame.

Below are the videos from a special JBM interview with Berkow. It is very entertaining, as he shares personal stories about knowing the Jewish greats of the greats.

“Andy Cohen once told me he made a great catch. And someone in the stands said, ‘Just like a Jew, trying to get your hands on anything you can.”

“I wrote a column with a headline, ‘Koufax is no Garbo.’ He saw the column and I think he appreciated it.'”

“(Jewish sportswriter Shirley Povich) once said Hank was ‘the perfect standard bearer for Jews. He was smart; he was proud; and he was big.'”