A fan’s tale: For love of Mets; Recalling life as vendor at Shea Stadium 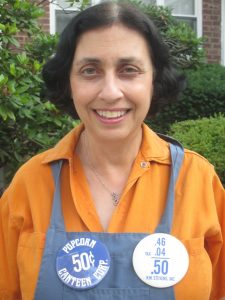 A diehard N.Y. Mets fan who grew up in Bayside, Queens, a few miles from Shea Stadium, Michele Chabin loved attending games there with her family. As a teenager, in 1974, she landed a dream job: working for the team as a vendor. She was one of just a handful of females performing such work then. She toiled, but thoroughly enjoyed what she did – and the earnings that came with it, which helped put her through college.

Chabin became a copy editor with Cosmopolitan magazine in Manhattan. She moved to Israel in 1987 and since then has lived in Jerusalem, where her twin sons played in Little League. A freelance journalist for 20 years, Chabin covers Israel for USA Today, New York’s Jewish Week and other publications. And every Purim, she dons the ol’ vendor’s uniform and bellows, “Getcha beer here!”

“From what we understood, we were the first four female vendors to work in the stands at any sports stadium in the United States.”

At Brandeis University, “I had to pay for housing, living expenses and books, so working at Shea Stadium helped me a lot.”

“It’s not every day that a 15-year-old can achieve a dream. To go to a baseball stadium three, four days a week; to be close to the players; to earn good money – I felt like I was on the greater Mets team.”

“I put off being Shomeret Shabbat [Sabbath observant] because of the Mets. … I was working the games, and [vending] was important to me.”

How did you come to be a vendor at Shea Stadium?

Chabin: I was a lifelong Mets fan. My parents, Aaron and Helene, were very working-class and didn’t have a lot of money, but we did go to games as a family activity. My dad worked at a liquor store across the street from Yankee Stadium, and would get some free box seats. That was a huge treat for us, and we watched almost every game we could on TV. I was a huge Mets fan.

So in 1973, when they reached the World Series, I was very excited, and my love of the Mets intensified. On the day after my 15th birthday, in February 1974, I wrote a letter to the Harry M. Stevens corporation, the concessionaire there: “I live in Bayside, Queens, and I have an A+ average” – as if they would care – “and I really want to be a vendor at Shea Stadium.” To my utter shock and thrill, I received a letter back, and they said, “Sure, come on down for an interview.” I couldn’t believe it. I brought a very good friend of mine named Susan Cohen. We started in the spring.

I worked the weekends and some afternoon games and the whole summer. My dad would sometimes drive me there and I’d get rides back; sometimes I’d take the subway – the No. 7 train – and the bus. I was earning money, and it was hard work.

I was the skinniest, most underweight, scrawniest teenage girl you’ve probably ever seen. They gave me soda, but the trays were too heavy for me, so they gave me ice cream, peanuts and popcorn. At the beginning, Harry M. Stevens was concerned about the welfare of the four of us girls who were working; the two others were, I believe, the daughters of a sportswriter. From what we understood, we were the first four female vendors to work in the stands at any sports stadium in the United States. I can’t verify that, but that’s what we were told by the Harry M. Stevens corporation.

Our appearance really stirred interest from fans: usually a thumbs-up, and sometimes a pinch on the tush. We were on the field level because they wanted to keep an eye on us. When we proved ourselves, they started letting us go up in the higher decks, which were a lot more work because there were a lot of stairs. We worked damned hard.

How did you react to that inappropriate touching?

Today, someone like that would be thrown out. Back then, things were a lot more liberal, and people had a lot more tolerance for sexual harassment. They were hooting and they were whistling. But the male vendors had our backs. We did our jobs, and we did the best we could.

I’m guessing that you were very busy.

Yankee Stadium was under renovation, so we had much more work. I was working almost every day because when the Mets were away, the Yankees were playing and vice versa. In the fall, we worked the Jets games. When the Yankees went back to Yankee Stadium, we were invited to work there, too [and did]. It was amazing. For those three and a half years, I saw a tremendous amount of games. Of course, the more you work, the less you actually see. We were hard-working women.

At the end of August of 1977, I went to college at Brandeis University in Massachusetts. I did come back because another vendor going to school at UMass drove down for the World Series games [at Yankee Stadium]. We worked those games – that’s the only reason we went back. It was a three-and-a-half hour trip, the money was so good and we loved our jobs. We were passionate about what we did. You had to be in love with the sport. We had a special feeling for the players. We felt like we were part of the team.

And you loved baseball even before landing the job.

I was a huge Mets fan. I had a crush on Rusty Staub. [After Staub’s Oct. 2015 heart attack,] I sent him a get-well message on Facebook. I was a big fan of Buddy Harrelson. I lived in Bayside, Queens, and some of the Mets lived there. One was Tom Seaver. My girlfriend Eileen and I were big fans of Danny Frisella, the late relief pitcher. We found out that he lived not that far from us. I made a little dog out of wool and I put a message on it and left it in front of their house. His wife wrote back a really beautiful note to me. I was about 10 years old.

Once, I met him at a game. The vendors would sit in the box seats before the games, after we put on our uniforms and before the fans came in. I once got an Ed Kranepool bat; he broke it and gave it to me during batting practice. It connected me to the Mets. Even though they stank at the time, they always gave you hope. They were the home team, and I come from a family of baseball lovers. My mother was a Brooklyn Dodgers fan.

What do you remember about games you attended as a fan?

I was at the playoff game in 1973, the Pete Rose-Buddy Harrelson fight. It was remarkable to see that live. That was an incident that haunted baseball. I remember seeing Willie Mays play. It was remarkable, seeing this legend. Being in the stadium makes it all come alive – being with the crowd. It filled me with pride: being a New Yorker, being a Mets fan.

What did you do with your earnings as a vendor?

It paid for my first trip to Israel in the summer of 1978. It was my first trip on an airplane. I had a full scholarship to Brandeis, but I had to pay for housing, living expenses and books, so working at Shea Stadium helped me a lot.

What does that experience mean to you in retrospect?

It was a dream come true. It’s not every day that a 15-year-old can achieve a dream. To go to a baseball stadium three, four days a week; to be close to the players; to earn good money – I felt like I was on the greater Mets team. The experience fostered my independence. And it gave me money I wouldn’t otherwise have had.

What would you tend to watch at the game?

I would watch the umpires. Something that I thought was an out, they said wasn’t. You could see how close a ball was to being fair, or to being foul. Sometimes, I’d be afraid of a ball. In the loge level, sometimes you’d hear the roar of the crowd, and I may have been turned while serving somebody, and I could almost sense the body language and I’d hope I’m not going to get creamed by the ball.

Once, I got a foul ball. It fell where I was able to pick it up. After the game, I went to the VIP lounge; that was sometimes how we left the stadium. Joe DiMaggio was there, and he signed the ball for me.

There’s not a single picture of me as a vendor, as far as I know. I do still have the uniform. I sometimes dress up as a vendor for Purim! I have the navy-blue apron and the dark-blue and white Harry M. Stevens shirt. I don’t have the cap anymore. The shirt still fits me.

To this day, I can’t stand the smell of beer. In the tunnels, where we’d pick up the concessions, beer would fall on the ground and would stink. When I was vending, my parents and little brother would come, and sometimes my uncle and aunt. The Mets gave us a lot of heartache, but a lot of joy. I would come home from a day of vending, and we would talk about it. I didn’t see my dad that much as a teenager. This was a way for us to bond.

The love of the Mets continues into the next generation. My husband’s daughter, Ellie Beatus, blogs about her family’s experiences going to Mets games now. It gives us a sense of pride and continuity.

I put off being Shomeret Shabbat [Sabbath observant] because of the Mets. I became more religiously observant at 16, and during the winter months, when there weren’t any games, I would go to shul – but I did work Shabbatot. I was working the games, and [vending] was important to me. But when I went away to college, I made the decision that I’d be Shomeret Shabbat.