Helfand played parts of three seasons as a catcher for the Oakland Athletics. He was originally selected by the A’s in the second round of the 1990 amateur draft, but was left unprotected in the National League expansion draft and was claimed by the Florida Marlins with the 18th pick in 1992. The Marlins promptly traded him back to the A’s, however, in exchange for shortstop and future manager Walt Weiss. He made his major-league debut on Sept. 4, 1993, and played his final major-league game on Sept. 30, 1995. He signed as a free agent with the Cleveland Indians in December 1995, but never made it back to the big leagues. As a high school senior in San Diego, he had a gun for a throwing arm, throwing out 14 of 16 would-be base stealers and picking off an additional five with notoriously strong snap throws to first base. 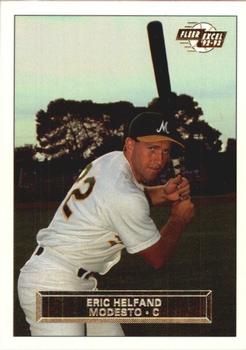 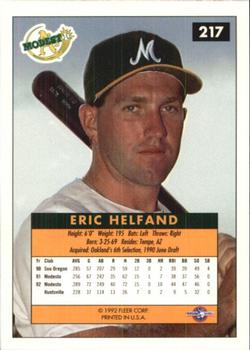 Eric is one of three Jewish major-leaguers who played at Arizona State, in addition to Ian Kinsler and Ike Davis. He transferred to the Sun Devils after one season at Nebraska.