A native of Miami Beach, Hurst was selected in the 20th round by St. Louis in the 1989 draft. In 1995, the pitcher signed as a free agent with the Florida Marlins. A strong season in the minors in 1996 earned him a September promotion with the Marlins. His big-league career was limited to two innings in two relief appearances. He gave up 1 run on 3 hits with a walk and a strikeout. 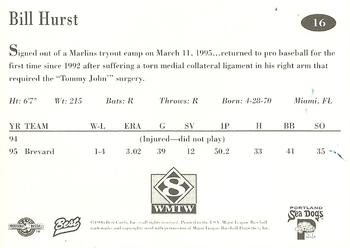 Bill missed the 1993 and 1994 minor-league seasons after undergoing “Tommy John” surgery to repair a torn medial collateral ligament in his right arm.