Ike is a son of Ron Davis, who pitched in the major leagues for 11 seasons. His mother, Millie Gollinger, is Jewish. Davis’ paternal grandfather was a U.S. Army paratrooper who helped liberate concentration camps, where many of his mother’s relatives were murdered. Ike’s great-aunt was a Holocaust survivor. As a youngster, Davis was a baseball prodigy. In high school he led his team to three consecutive Arizona state championships as a pitcher/first-baseman, batting .447 and posting a 23-0 record as a pitcher. At Arizona State University he was the first freshman ever to lead the PAC-10 in RBIs, and he became a two-time All-American and three-time All-Pac-10 selection. Davis was selected by the New York Mets with the 18th pick in the 2008 amateur draft. He made his major-league debut in 2010 and still holds the Mets’ rookie record for total bases (230), as well as a share of the Mets’ rookie records for bases on balls (72) and extra-base hits (53). On July 28, 2012, he hit solo home runs in his first three at-bats against the Arizona Diamondbacks, becoming only the 7th member of the Mets to homer three times in a single game and the sixth Jewish player to accomplish the feat. 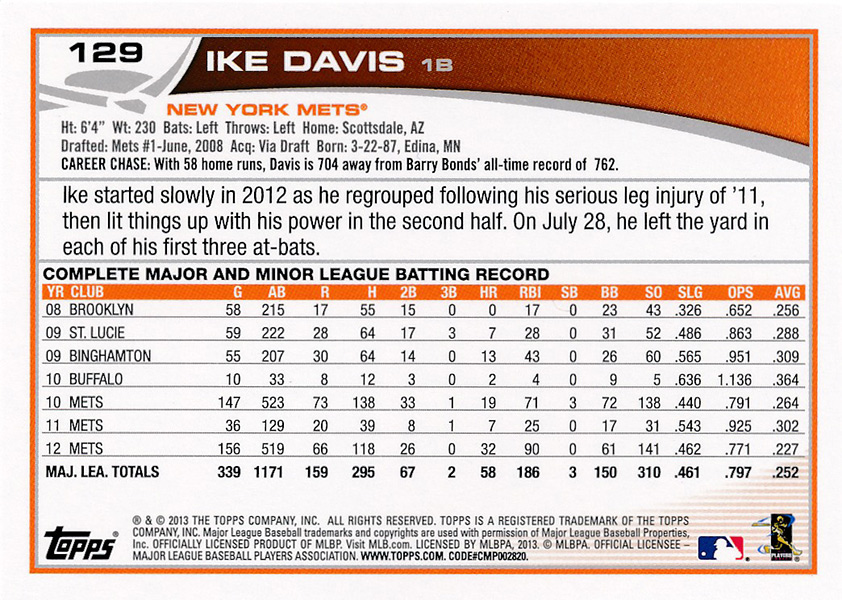 On April 21, 2015, Davis pitched a perfect eighth inning for Oakland in a blowout loss to the Angels, retiring all three batters he faced, all on ground balls, using only nine pitches.