The Jewish pitcher in the major leagues with the most victories is not named Sandy Koufax. Holtzman, whose career was just starting as Koufax’s was ending, played just 12 minor-league games before joining the Chicago Cubs, thus becoming the first drafted player to reach the majors (the amateur draft began in 1965). Holtzman and Koufax faced each other on Sept. 25, 1966, and Holtzman took a no-hitter into the ninth inning as the Cubs won 2-1. En route to 174 career victories, he pitched two no-hitters for Chicago — the first of which came without registering a single strikeout. While in military service in 1967, he was allowed to pitch on weekends, and went 9-0 in 12 games. In 1969, he tossed a Cubs-record 33 consecutive shutout innings. With Oakland, he was named an AL All-Star in 1972 and 1973, winning 19 and 21 games, respectively. He later played for the Orioles and Yankees before finishing his career back with the Cubs. Over his career, he held batters to a .220 average with two out and runners in scoring position. After his playing days, Holtzman worked for a St. Louis Jewish Community Center and in 2007 managed Petach Tikva of the Israel Baseball League. 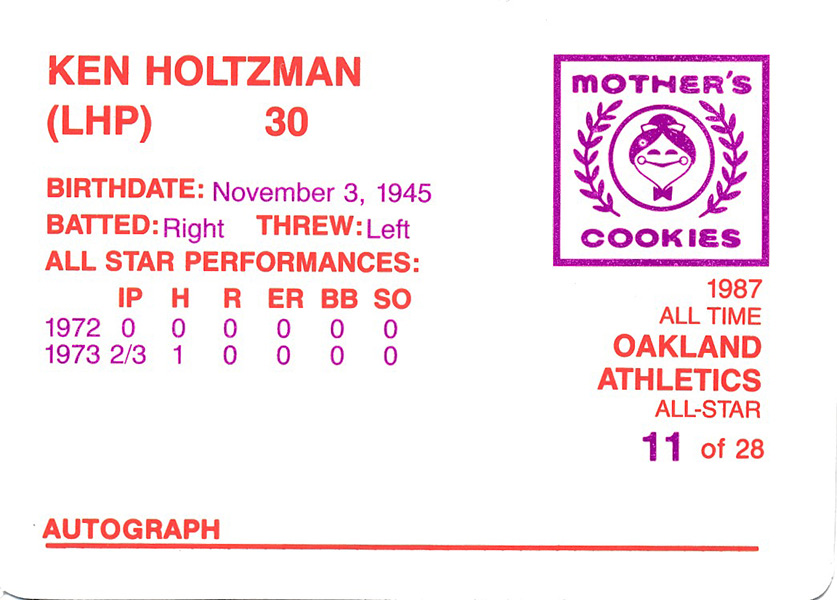 Holtzman had a 4-1 career record as a World Series starter for Oakland, and hit a home run in the 1974 Series.