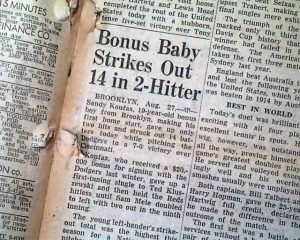 That came as bad news to another left-handed pitching prospect for the Dodgers: Tommy Lasorda. In order to make room for Koufax, Brooklyn had to send the future Hall of Fame manager back to the minors.

“It took the greatest left-handed pitcher in baseball history to get me off that Brooklyn club,” Lasorda said.  “I still think they made a mistake.”

Koufax had the electric arm, but he was wild. Manager Walt Alston was reluctant to use the 19-year old. 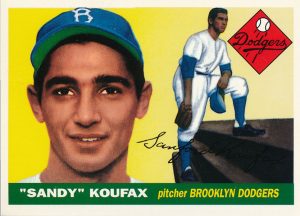 As a result, Koufax didn’t appear in his first MLB game until June 24 of that season. He entered the game in the fifth inning with the Dodgers trailing Milwaukee 7-1.

Koufax gave up a single to Johnny Logan in the first batter he faced in the big leagues. He wound up pitching two scoreless innings of mop-up duty.

Two weeks later, Alston gave Koufax his first start. Even though he only allowed one run on three hits, he couldn’t find the plate, issuing 8 walks in 4 2/3 innings.

Alston clearly didn’t have confidence in Koufax. He didn’t start him again until an Aug. 27 game against Cincinnati.

This time, Koufax showed the first flash of what eventually would become the stuff of legend. He dominated the Reds, giving up only two hits. He was overpowering in recording 14 strikeouts. Gus Bell couldn’t touch him, the victim of 4 of those Ks.

Despite still issuing five walks, Koufax went the distance for a 7-0 victory, the first of 165 in his career.

The next day, the headline in a Detroit sports section (credit: rarenewspapers.com) called Koufax a “Bonus Baby.”

In Jane Leavy’s biography of Koufax, “A Lefty’s Legacy,” she has this quote from teammate Joe Black:

“Every pitch was whomp, whomp, whomp,” Black said. “I mean, they were coming back carrying the lumber. Next day, (Reds manager) Birdie Tebbetts) says, ‘That rookie made us look terrible. Where the hell they been keeping him?'”

Koufax also threw a shutout in his next start, beating Pittsburgh 3-0.  However, despite those strong showings, Alston rarely used him the rest of the way. For the season, he wound up 2-2 with 3.02 ERA in 41 innings.

Koufax did not appear in the World Series in which the Dodgers ended their long frustration in finally beating the Yankees. The young prospect still was a long way away from being the pitcher Alston counted on to win two World Series titles in the 1960s.

In 1955, Koufax had to settle for that first victory. Looking back, it was a sure sign that bigger things were yet to come.