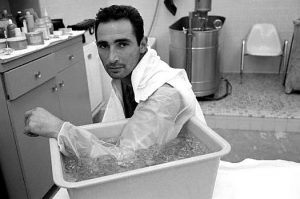 Sportswriter Jeff Passan is long past the stage in his career when he feels anxious at the prospect of interviewing a famous athlete. But Sandy Koufax was different.

It was a bucket list moment for Passan, the lead baseball writer for Yahoo Sports. A part of him felt as if he was back in Hebrew school, awed at the notion of getting to talk to the Jewish sports legend.

“I was more nervous for that interview than I’ve ever been before,” Passan said. “I didn’t want to screw it up.”

The interview is part of Passan’s excellent new book, “The Arm: Inside the Billion-Dollar Mystery of the Most Valuable Commodity in Sports.” Here is my review for the Chicago Tribune. Highly recommended.

The book details an epidemic in baseball, as so many pitchers find themselves under the knife for Tommy John surgery. Unfortunately, the game-changing operation didn’t exist in Koufax’s day. If it did, it might have prevented him from retiring in his prime at the age of 30.

In the book, Passan details what Koufax went through to get on to the mound. Just reading it will make you wince. 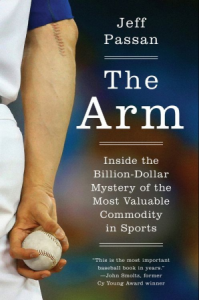 “On the day before, the day of, and the day after his starts, Koufax ate a white-and-orange capsule of Butazolidin, a brand of phenylbutazone, an anti-inflammatory originally intended for horses and totally considered unsafe for human consumption. He eased the pain with a codeine-cut aspirin.

“Then before Koufax pitched, the Dodgers’ training staff snapped on rubber gloves, scooped a glob of Caposlin, a clear pungent balm, and applied it to Koufax’s shoulder and back. Caposlin wasn’t a salve so much as a declaration of war; it consisted of 3 percent pure capsaicin, the active ingredient in chili peppers, along with turpentine, camphor oil and other elements that punished the body with heat….Koufax needed it to manage his misery.”

There’s more, including how Koufax often threw 160 or more pitches in a game, and worked on short rest. Little wonder why he finally had enough.

Koufax rarely gives interviews. So landing some time with the reclusive legend required some work on Passan’s part. It proved to be worth the effort.

“I arrived at the Dodgers spring training facility. (Former Dodgers PR man) Steve Brener took me to a hidden area. There is Sandy Koufax sitting in a chair. It was almost like the sun is shining down on him. Maybe I’m exaggerating, but it seemed like a light coming down from heaven.”

“Koufax did not think he had a torn UCL. Dr. Jobe thought he did. Jobe said if he had thought of the idea 10 years earlier, it would be Sandy Koufax surgery, not Tommy John surgery. That’s a gut punch right there.” 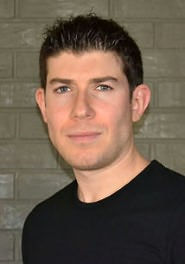 What was the process in getting an interview with Sandy Koufax?

Passan: From the start, he was the one guy I wanted to talk to the most. You can’t write about a book about the pitching arm without talking to Sandy Koufax. Besides his excellence, he is the face of pre-Tommy John pitchers.

The first thing I did was talk to the Dodgers. Is there any way this could possibly happen? The answer was not no, but it was pretty much no.

Then I went to Jane Leavy (the author of Koufax’s bestselling biography). She said write to a P.O. Box number in Vero Beach. So I spent a week hand-writing this letter. I wanted to write the perfect letter. I sent a two-page letter. Five days later, the letter was returned.

That’s it. I assumed I would have to write the book without talking to him. Then out of nowhere, Steve Brener (former Dodgers PR man who now runs Brener Zwikel & Associates in Los Angeles) called and said, “Would you like to talk to Sandy?” I went, “Let me think about that. YES!” I booked a flight the next day to (meet at the Dodgers spring training site in Arizona).

How did you feel going into the interview?

I was more nervous for that interview than I’ve ever been before. I didn’t want to screw it up. The only other time I was as nervous was when I interviewed Michael Jordan. But Koufax was different. It’s Sandy Koufax and I’m a Jew. When you’re in fourth grade and you’re going to Hebrew school, and you have to write a book report, you’re going to write about Sandy Koufax.

Of the iconic moments in the 20th century involving famous Jews, Sandy Koufax choosing not to pitch on Yom Kippur is (high on the list). It had faith, it had conviction. It was something all of us understood. There is a certain pride in being Jewish, and he embodied that.

Describe the moment when you met him.

I arrived at the Dodgers spring training facility. Steve Brener took me to a hidden area. There is Sandy Koufax sitting in a chair. It was almost like the sun is shining down on him. Maybe I’m exaggerating, but it seemed like a light coming down from heaven.

We shook hands. He has these big strong hands. You could see how he threw that curveball. He is in immaculate shape. He just looked glorious.

How did the interview go?

He was great. I was bad. I felt like Chris Farley doing “The Chris Farley Show” on “Saturday Night Live.” How are you doing, Mr. Koufax…?

He’s got all the things you’re looking for in a great interview. He’s got the reputation that he has because he doesn’t talk much. But once he does, he can be expansive, interesting and thoughtful.

He really wanted to talk about Frank Jobe. He has an enormous amount of respect for him. He didn’t work with him when he was a player, but (post-baseball), Dr. Jobe was his point man. He wanted to talk to Dr. Jobe and his contribution to the game.

Your book graphically documents the extraordinary pain Koufax endured during the later stages of his career. How did he do it?

You have to remember this was pre-orthopedic revolution. Tommy John surgery didn’t exist. MRIs didn’t exist. What they knew of the elbow was from cadaver work.

But you know what inflammation is. You know what bruising is. He had remarkable amounts of both. The fact that he pitched as often as he did, with as many pitches as he did, is astounding.

You write in 1966, Koufax threw a 168-pitch complete game victory against the Mets. Dodger manager Walt Alston knew his star pitcher was hurting, and yet he left him because he didn’t want to wear out his bullpen. What was he thinking?

Now it’s gone the other way where it’s a bit too much kid gloves with pitchers. I think certain guys can do more.

But to put somebody out there as much as the Dodgers did with Sandy, knowing in hindsight what we know now, there’s a sadness to it. It makes me sad what an arm like his was subjected to because of ignorance.

It was understandable ignorance because the technology didn’t exist to realize what they were doing to pitchers at the time. You just wish he could have pitched 10 years longer.

Would Koufax have benefited from Tommy John surgery?

Koufax did not think he had a torn UCL. Dr. Jobe thought he did. Jobe said if he had thought of the idea 10 years earlier, it would be Sandy Koufax surgery, not Tommy John surgery. That’s a gut punch right there.

Was any kind of surgery an option for Koufax?

Koufax didn’t want surgery. Back then, the thought was it would speed up the arthritis. You’d spend the rest of your life unable to lift your arm.

Koufax wanted a life after baseball. I respect his decision (to retire at 30) as much as any he ever made.

If his career had continued, what kind of pitcher would he have been in his late 30s?

He wasn’t just a fastball pitcher. He had outstanding off-speed pitches. He also was a highly intelligent pitcher. Even if he lost something off his fastball, he would have adapted. I could see him becoming a crafty lefty, getting guys out deep into his 30s. If he had pitched longer, there’s no question he would have been the best pitcher ever.

Ed Sherman is the managing editor of JewishBaseballMuseum.com.