Is God a Cubs fan? One JBM loyalist asks question every Yom Kippur 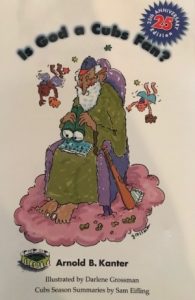 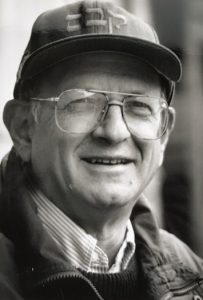 Each Yom Kippur, Cubs and JBM fan, Arnie Kanter, delivers an address to his congregation on the relationship between God and the Cubs.  These pieces have been collected in three editions of his book IS GOD A CUBS FAN?

The book features some high-profile endorsements.

Barak Obama: “Cub-mania is at a fever-pitch. I take pride in Chicago’s reputation as a city of grit and character, and the Cubs’ suffering has definitely contributed to that character; we clearly owe the team a debt of gratitude. Keep writing.

Bud Selig: “Faith and hope are part of being a fan of Major League Baseball and that is poignantly demonstrated in Arnie Kanter’s book. Baseball fans will truly enjoy this book.”

To purchase a copy of the book, please contact Arnie at arnie@kanterprofessional.com.

Here are a couple of Arnie’s talks. There is one from 2008 on the 100th anniversary of the Cubs’ last World Series title.  And another from last year after Arnie and Cubs finally reached The Promised Land.

In 1984, I went with my heart in predicting that the Cubs would reach the World Series, thereby proving the existence of God.  So much for the heart.  This year, I opted for a more rational assessment.  I decided to try the mind.

I asked myself, “Arnold, how can we determine whether the time is right?”  Well, I reasoned, the Cubs winning the World Series would be an apocalyptic event.  So we had to ask whether there were signs that the universe was preparing for such an apocalypse.  I identified nine clear signs.

And, yet, we all know what happened.  So, I was pretty puzzled.  And I decided to ask God where I had gone wrong.  Now I know that we Reconstuctionists are supposed to believe that God is that force within the universe that makes for good, or something like that.  To that my reaction is, “C’mon, give me a break.”  So I have reconstructed the notion that God is a force for good within the universe to mean that God is some little old white dude with a long white beard and robe, sitting up in the sky.

So, I asked unto him, “All-Knowing Little Old White Dude with a Long White Beard and Robe, Sitting Up in the Sky, would it not be an apocalyptic event if the Cubs won the World Series?”

To which He replied, “Duh.”

“And have there in fact not been many signs of such an apocalypse this year:

“First, the entire financial structure of the world has collapsed.

Second, the candidates for president and vice president of the United States include a Black man and a white female moose hunter.

“Fourth, this is the year that Yankee Stadium—the House that Ruth Built–is being destroyed.  Better still, even before the physical destruction of the stadium, the Yankees themselves—the players that Steinbrenner bought—self-destructed.

“Fifth, this is the year in which the Cubs acquired their first Japanese ball player, Kosuke Fukodome.  And the Japanese alphabet is like totally inscrutable.  So that’s something.

“Sixth, each year at the JRC benefit, I auction off tickets for a Cubs game with me and the rabbi.  This year’s game was against the Astros on Monday, August 4, the night, you will recall, on which you flung down 90,000 bolts of lightning and caused a Biblical deluge to descend upon Wrigley Field.  As Brant, the Davidsons and I boarded the El home, we noticed that you had reserved one car that looked to be roughly 40 cubits high for a pair of male and female ball players who play each position.  (And, of course, we should not fail to note that the word ‘cubit’ contains the word ‘Cub’ within it and, in fact, in ancient times, was pronounced ‘Cub hit.’  But I digress.)

“Seventh, again the Astros.   When you smote Houston with Hurricane Ike, two of the games the Cubs were to have played there were moved to Milwaukee.  Then did you bless Big Z with a no-hitter in the first game and curse the Astros, who had won 14 of their previous 15 games, allowing them a total of one hit in losing two games to the Cubs.

“Eighth, on the night of August 28, the 45th anniversary of Martin Luther King’s “I Have a Dream” speech, as Barack Obama accepted the Democratic Party’s nomination for president of the United States, in a stadium full of wildly cheering fans, Aramis Ramirez socked a grand slam home run in the last of the eighth to lead the Cubs to an improbable 6-4 win over the Phillies at Wrigley Field.  Same principle; different dreams.

And finally, ninth, one year ago, I planned a trip to Africa.  Carol and I leave tomorrow and will be gone for the World Series.  This was to be my sacrifice, so that other Cubs fans should live and be happy.”

Whereupon, the Little Old White Dude spake unto me, saying, “Verily, what you say is true.  All of these matters you have enumerated are signs of an impending apocalypse.”

“Then, Dude, like where did I go wrong?” I asked

And He replied, “In the torah, it is said, ‘Lo b’shamayim.’  It is not in the heavens or beyond the seas—or in the sky boxes–that answers reside, but rather very near to you.  In other words, Boychick,  ‘Apocalypse, acropolis; those bums lost three straight games to the damn Dodgers.  Are these, by you, world champions?’”

So, in the end, all of those signs around Wrigley Field this season predicting, “It’s Gonna Happen” were prophetic.  They needed only add, “Again.”

But, not to worry, the 2009 season starts a brand new century for the Cubs, and I have a feeling that this just might be our century.  Right, Dude?

I gotta be honest here, I’m very jealous of Marie being able to convert from the Red Sox to the Cubs and from Catholicism to Judaism.

How dull is that?  After all, doesn’t growth require change?

This is my 34th consecutive Open Mike talk.  And, I asked myself, “Boychick, Isn’t that long enough?”  (And I’ll be honest, I added, “for Chrisake,” because we Jews always say “for Chrisake” when we want to emphasize something.)

I mean, unlike Moses, I actually entered The Promised Land, when Carol and I drove to Cleveland for the seventh game last year. We drove there without tickets.  Friends were shocked to hear that we’d do that, but I told them, “He provided a ram for Isaac, didn’t He?”  I knew we’d be just fine, because that’s why God created StubHub

Anyway, after the game, when all of the Cubs fans stuck around at the lower level of the park, I saw a lady holding a large sign that expressed exactly how I felt.  The sign said, “Now I can die in peace.”  Not “die happy,’ because that would not have captured it, but “die in peace.”

And, it’s true, this year there’s been a new calm about me.  Sure Carol and I went to a lot of Cubs games, and recorded and watched almost every game that we didn’t go to.  But, we were World Champions, so what did it really matter if we lost?  The perpetual angst I had felt for over seventy years of Cubs fandom was gone.

So, I’ve decided that this is it, my last Open Mike at JRC.  I still have a passion for baseball.  But I need a new outlook.  I need a perspective from which not winning the World Series every year is a shanda. I need my angst back.

So, I’ve decided to convert.  I’m going to become a Catholic, and a Yankees fan.

Becoming Catholic is easy, and convenient.  Easy because they worship one of our boys.  And convenient, because the cardinal’s home is directly across the street from our condo.  I can stop over to have a Bud with His Eminence any time, and shoot the breeze. And, besides, I’ve been speaking in churches for over thirty years, so I’m comfortable there.

Now, admittedly, becoming a Yankee fan is much tougher.  But not impossible.  After all, Joe Girardi, a Northwestern graduate and former Cub became the Yankee’s catcher and manager.  And Girardi is a Catholic, as I will be.  Oh, sure, as a Jew, it was nice to feel pride in Sandy Koufax and Hank Greenberg; but they were never Cubs. So just imagine being a Catholic Yankees fan who can claim Babe Ruth, Joe DiMaggio and Yogi Berra as his own.  Who wouldn’t kvell (if Catholics can kvell; I’ve gotta ask the cardinal about that)?

In case any of you want to continue to follow me, I’ve convinced the folks at Holy Name Cathedral to institute an Open Mike tradition at the close of Easter Services.  (Easter, by the way, generally comes around the time of your Passover.)

So, until then, L’ Shana Ha Ba-a B’ Yankee stadium.  And may God bless you all, my children.