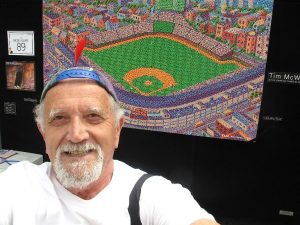 The bleachers at Wrigley Field have hosted some memorable characters over the last hundred years, but few Cubs fans have been more colorful or passionate than Jerry Pritikin, a.k.a. “The Bleacher Preacher.”

A photographer, publicist and self-described “Cub nut,” Pritikin began attending games at the Friendly Confines in the 1940s, and has witnessed over a thousand Cubs games in person. As “The Bleacher Preacher,” Pritikin became a prominent fixture in the Wrigley bleachers during the mid-1980s; sporting a pith helmet with a solar-powered propeller, Pritikin could usually be seen flashing homemade signs (including one reading “How Do You Spell Belief? C-U-B-S” and another spelling out “The Ten Cub-Mandments”), tussling with a life-size voodoo doll dressed in the uniforms of opposing teams, and loudly proselytizing on behalf of the Chicago Cubs.

Pritikin’s shtick caught the attention of Cubs broadcaster Harry Caray, who dubbed him “The #1 Cubs Fan,” but his devotion to the game has also been recognized in recent years by such organizations as the Chicago Senior Citizen Hall of Fame, the National Gay and Lesbian Sports Hall of Fame, and the Baseball Reliquary. The Jewish Baseball Museum recently interviewed him at his home on Chicago’s near north side. 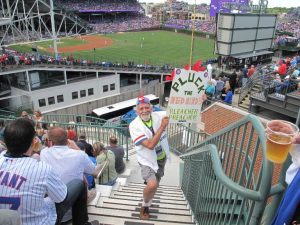 “When I found out that [Hank Greenberg] had become the GM of the Indians, I sent him a Mezuzah and a letter wishing him luck, and he sent back a signed card. The Indians won the pennant that year, and I always said that I was their tenth man because of the Mezuzah that I sent Greenberg!” 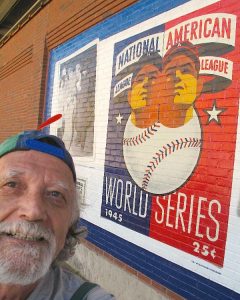 When did you first become a Cub fan?

Jerry Pritikin: I’ve been a Cub fan since 1945. I was eight years old; I had been to games earlier than that with my father, but I didn’t really know what was happening. He used to let me run around, and he’d sit up in the bleachers where the betting section was. [Laughs]

In Albany Park, which was a Jewish neighborhood in Chicago — though when I say “Jewish neighborhood,” if it was fifteen-to-twenty percent Jewish, I may be exaggerating. But we thought it was a Jewish neighborhood! My brother and I came back from summer camp in August ’45, right after they dropped the atomic bombs on Japan. My father celebrated the end of the war by buying me my first two-wheeler, and he also got me a J.C. Higgins mitt for $8.95. J.C. Higgins was a sporting division of Sears, Roebuck — but I thought it was a Pinky Higgins mitt until somebody said, “No…” [Laughs]

My father gave me a crash course in Baseball 101, Cubs history, Hank Greenberg, and also how to keep a scorecard, so my knowledge of the ballplayers really started at that time. He took me to a game that August, and it was the first time we’d ever come into the park through [the main entrance] at Clark and Addison. I remember looking out at the field and thinking how gigantic the scoreboard looked. It was like coming into the Grand Canyon of baseball!

About three or four weeks afterwards, when the Cubs clinched the pennant, I asked my dad to take me to the World Series. He said I was too young, but he promised that he’d take me the next time the Cubs went to the World Series. [Laughs] Looking back, he worked weird hours, so he might not have actually been able to go, anyway… But the way I always put it is that he made me a promise, and my whole life afterward has been about getting to the promised land!

You were a big Hank Greenberg fan, but you didn’t get to see him play until 1947, his final season. What do you remember about that?

My father took my brother and me to Opening Day in 1947, against the Pirates. I think he felt a little bit of guilt about not taking us to the World Series in 1945, because Hank Greenberg was in that World Series. But Greenberg had been traded to the Pirates before the 1947 season, and he was playing in his first National League game that day at Wrigley Field!

It was overcast that day, and they didn’t do any batting practice because it had drizzled the night before, and [the grounds crew] had put heavy tarps on the field to make sure that they’d be able to play. In the sixth inning, there were two outs, and Billy Cox — who was the third baseman for the Pirates at the time — was on base. Greenberg hit a double to left-center, driving in Cox for the game’s only run. And I had mixed emotions about this, because I was a Cubs fan! [Laughs]

A month later, I was in the ballpark again with my brother, to see Jackie Robinson play in Chicago for the first time. There were 47,000 people on hand, and half — well, maybe not half, but a great many people — brought binoculars so that they could see Jackie Robinson. People would usually bring binoculars to football games in those days, but not baseball games. We were sitting on the third base side of the grandstand. I think the tickets were 65 cents, if I remember right… We had to get off the streetcar four or five blocks before it got to Wrigley, because there were so many people lined up at the ticket office!

I went to another Cubs game against the Pirates in 1947, and before the game, I actually got two future Hall of Famers to sign my scorecard: Greenberg and Ralph Kiner. My father had taught me how to keep score, and I decided I was going to keep the world’s best scorecard. I sat down the left field line, in the grandstand past third and under the upper deck. And I kid you not, there was not one eraser mark — I really put my mind to it, because I’d gotten both of those autographs, and I wanted to come home and show them to my father along with a perfect scorecard. But in the sixth inning, a pigeon dropped a load right in the fold of the scorecard! [Laughs] There was no way I could salvage it. So my father never got to see that scorecard, and I didn’t get to keep those two autographs. 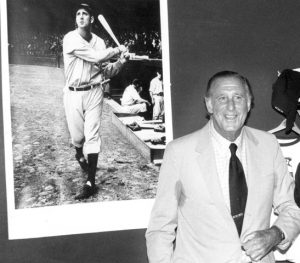 You got Hank’s autograph the following year, though, when you sent him a Mezuzah. What inspired you to do that?

Well, I was always a Greenberg nut. I remember during spring training in ‘48, Greenberg was practicing with the Indians; there was a picture in the paper of him sliding into second, but he had number 29 on his back instead of number 5. But Lou Boudreau had number 5 in those days… So I thought, “Oh, he’s going to be playing again!” But when I found out that he had become the GM of the Indians, I sent him a Mezuzah and a letter wishing him luck, and he sent back a signed card. The Indians won the pennant that year, and I always said that I was their tenth man because of the Mezuzah that I sent Greenberg!

Where did the idea for “The Bleacher Preacher” come from?

I lived in San Francisco for many years, and one day in early 1981 I came home from pitching a softball doubleheader and turned on the TV. PBS was showing the play Bleacher Bums, and it was just starting. I watched the whole thing, and I found myself cheering along with it. The very next day, I saw an ad in the paper looking for actors for a production of Bleacher Bums in San Francisco. I called the producer, and I said, “Hey, I’m a Cub nut. I know a lot of Chicagoans living in San Francisco; I think I can help you on your public relations!” Next thing you know, I got hired as their publicist! 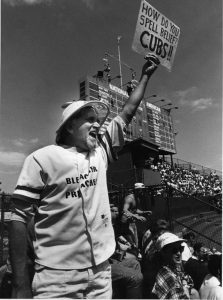 When the baseball strike happened that summer, the Bill Veeck in me really came out. I started calling the sports people at the newspapers and TV stations — since they didn’t have anything to write about baseball, I’d say, “Come to the play!” And we were getting all these write-ups and selling out every night. It was a ninety-nine seat theater, and it was supposed to be a six-week run — it ran for over a year and a half! At one point, they moved it to a larger theater, and I turned the lobby into Wrigley Field West; I got the ushers to wear Andy Frain uniforms, and we had Vienna Beef hot dog stands in the lobby…

So the evolution of “The Bleacher Preacher” really started there. Then, in 1984, Sports Illustrated did a story, “At Last, The Cubs Are In First.”  And it started off with a story about my dad: In 1980, my father was in a coma for the last 30 days of his life; he was at Evanston Hospital, and I came back to Chicago to visit him. He came out of his coma only once; I was there, and I could hear him mumbling. I said, “Dad? What did you say?” And he said, “We gotta get rid of Kingman!” [Laughs] That was the last thing he ever said. So my father is part of Cubs lore, just like I am. 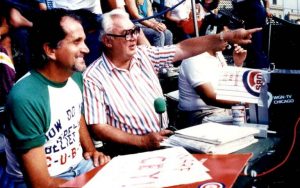 What made you decide to move back to Chicago?

I happen to be gay, and I was losing a lot of friends in San Francisco at the time [to AIDS]. So I came back to Chicago; I got more wrapped up in the baseball thing than I planned to, but it was really part of trying to get away from the shadow clouding my mind.

Is the Bleacher Preacher still active these days?

I can’t afford to go to games anymore. When I first came back in the ’80s, I went to every game. Then I boycotted the Cubs for a while in 1991, when they raised the price of a bleacher seat from four to six bucks. I started coming back slowly, but not every game. And every year they kept raising the price, raising the price… The reason I became a Cub nut in the first place is because my dad could afford to take me and my brother and our friends to games, but a Saturday bleacher ticket is now $75 for a kid or an adult. It’s sickening. I usually still go on Opening Day, and let my presence be known, but I don’t go to many other games. I still want to make it to the promised land, though! 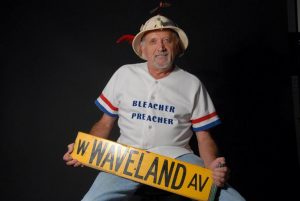 Do you think the Cubs will get there this year?

When the Cubs were hot at the beginning this season, I remember saying to myself, “Should I start making plans for October?” And then I thought, “Don’t make plans.” [Laughs]