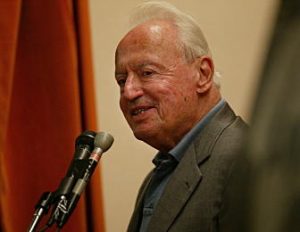 Thanks to Rabbi James Gordon for allowing us to run this excerpt on Marvin Miller from his book, Pray Ball 2 !!

Just because society says it is okay to do something does not always mean that it is okay. According to Jewish, American, and many other countries’ labor laws, workers and employees are entitled to certain rights. At times, current laws do not reflect the goals of society or provide honor and respect to all, and thus need to be amended or expanded or even instituted. Through courageous efforts of brave people, the appropriate changes can be, and often are, realized.

In 1966, Marvin Miller was hired by the Major League Baseball Players Association (MLBPA) to be its executive director. Leaving a prominent position as a labor economist for the powerful United Steelworkers of America, Miller took a professional risk when assuming this leadership role for the underfunded and understaffed players’ union. After all, before his arrival, the MLBPA was considered to be a weakling among professional organizations; in fact, it was described by Dahlia Lithwick in the book Jewish Jocks as “a fairly toothless fraternal group.”

For anyone skilled enough to play in the MLB, it should be, and it is for many, a great honor to be a member of this elite fraternity. After all, this is a dream shared by a countless number of ambitious little boys around the world. Before Miller’s tenure, little economic power came with this “great honor.” Players were essentially at the mercy of the owners.

With the wisdom gained from being raised by parents who were active in their support for organized labor (his father was a clothing salesman and his mother a union public school teacher), along with his wealth of prior work experiences, Miller quickly realized that injustices were being done to the players. From an economic perspective, they were being exploited by the owners. For example, the “reserve clause,” a paragraph included in every MLB player’s contract, bound the player to that team until management decided otherwise. This left players essentially as – in former U.S. Senator Sam Ervin’s words, “well-paid slave(s)”– unable to choose their teams. Additionally, all grievances a player had with his team were arbitrated by the commissioner, who had an inherent conflict of interest since the owners hired him.

Having assessed these injustices, Miller quickly realized that the players association could be transformed from a “toothless fraternity” into a powerful union, a collective bargaining unit that could obtain for its members what the law entitled the players to receive. As with all labor leaders, the major obstacle that Miller faced was changing the mentality of the players and inspiring them to buy in to his philosophy. In a relatively short time, Miller gained the respect and confidence of the players. Over the course of the nearly 17 years with the organization, his efforts led to significant changes that benefited the players and the game (and team owners) as well. Here are some of the major accomplishments achieved by the Miller-led MLBPA: (1) A player’s right to have a grievance heard by an independent arbitrator, whose decision would be binding; (2) A practical end of the reserve clause, achieved through the courage of Curt Flood (please see next passage) and wise legal decisions of arbitrator Peter Seitz and a federal court which upheld Seitz’s decision; (3) With the fall of the reserve clause and an agreement as to when a player would be considered a free agent, salaries rose. When Miller began his tenure the average salary was $19,000 and when he retired in 1982 it was $241,000; (4) Players gained the right to be represented by an agent; (5) An increased pension plan funded in part by television revenue; (6) Safer working conditions, including padded outfield fences, better locker rooms, and more player-friendly scheduling of games; (7) With greater earnings and improved benefits, most MLB players no longer needed an offseason job. As full-time employees, they were better able to train, thus raising the level of the player and game.

Marvin Miller’s bold innovations in baseball spilled over into the other major professional sports in the United States, leading to similar improvements in benefits and salaries for players in the National Football League, National Basketball Association, and National Hockey League. While game ticket prices for MLB, NFL, NBA, and NHL games have risen dramatically, making it very difficult for many fans to attend, the players and owners have reaped great benefits – and one might say excesses.

For example, the total revenues for MLB owners in 1965 were about $50 million. In 2016, their revenues were approaching $10 billion. While directly improving the lives of MLB players (and indirectly, players from other major sports leagues) would qualify as an act of sportsmanship in my definition, it was met with hard feelings from many members of MLB management. (And admittedly, the outsize salaries paid to players these days are jaw-dropping.)

In spite of receiving recommendations from former MLB commissioners Bud Selig and Fay Vincent and other respected leaders in the baseball world, Marvin Miller has repeatedly been rejected from inclusion in Baseball’s Hall of Fame. Nonetheless, his efforts in legally leveling the playing field between players and owners have been recognized by the United States Supreme Court. In 2012, a little more than six months before he passed away, Miller became the first non-justice to have his portrait hanging in the halls of the United States Supreme Court.

Shifra & Puah:   Women Who Ensured the Future of the Jewish People through an Act of Civil Disobedience

When enslaving the Israelites did not slow down the Jewish male birth rate enough to assuage Pharaoh, he ordered the midwives who delivered the Hebrew babies, Shifra and Puah, to kill any Israelite boys that were born.   Because Shifra and Puah had too much Kavod, Derekh Eretz, and Yirah (reverence) for God and the Jewish nation, they risked their lives and refused to follow Pharaoh’s command.

When the two midwives were summoned by Pharaoh to explain their insubordination, they simply stated:

Because the Hebrew women are not like the Egyptian women. Rather, they are like wild animals; before the midwife arrives, they have already given birth (Exodus 1:19).

While some commentators (see Rashi, Exodus 1:19) state that Shifra and Puah were actually Moses’ mother Yocheved and sister Miriam, others (see Abarbanel) state that they were Egyptian women who had no vested interest in saving the Israelites.  These brave midwives risked their lives in order not to follow an immoral edict or law.  In his article On Not Obeying Immoral Orders, former Chief Rabbi of England Lord Rabbi Jonathan Sacks refers to Shifra and Puah’s refusal to obey Pharaoh as “the first recorded instance in history of civil disobedience.”

Not only did the Almighty reward Shifra and Puah and spare their lives and protect them, but their acts of Divine sportsmanship were rewarded by having dynasties descend from them.

To learn more about the noble acts of Shifra and Puah, see the Torah text (Exodus 1:15-21) and such Rabbinic sources as Sh’mot Rabbah 1:13 and Sotah 11b.