Q/A with Richie Scheinblum: All-Star with Royals; lessons from playing for Ted Williams 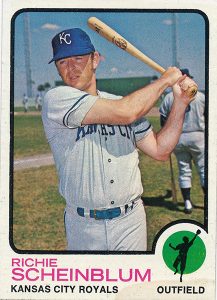 Richie Scheinblum played in the majors for a decade, and was a regular for just two seasons – his two best years, back to back. In 1972, with the Kansas City Royals, he hit precisely .300 (sixth in the American League) and played in the All-Star Game. In 1973, he finished at .307; he’d started slowly for the Cincinnati Reds and was traded to the California Angels, where he hit .328.

Scheinblum had some pop, if not always in the majors. After being sold by the Cleveland Indians to the Washington Senators and getting off to a slow start in 1971, Scheinblum was demoted to the Senators’ Triple A team in Denver. There, he hit .388, bopped 25 homers (nearly twice his MLB career total), drove in 108 runs, had a .490 on-base percentage – and won the American Association’s Most Valuable Player award.

Scheinblum bowed out of professional ball in fine form. With Japan’s Hiroshima Toyo Carp in 1976, he batted .307 and slugged 20 homers. Now residing near Tampa, Florida, Scheinblum makes a living as a salesman with a promotional-products company.

“At an Oldtimers Game, the great Buck O’Neil sat with me and said, ‘Did you know that I scouted you in Little League?’ He said, ‘I got a phone call, saying that there’s a midget in Englewood, N.J., who hit home runs.’ When I was 12, I was 4’6.”

“I played with some great, great players: Johnny Bench, Pete Rose, Nolan Ryan, Frank Robinson. I played with Lou Piniella for five years: in Cleveland, Kansas City and in Triple-A Portland. Of all the players I played with, I can’t think of any bad ones. They were all nice people.”

“I couldn’t hit in cold weather, for some strange reason. I needed to play every day – and when I didn’t, I had some problems.”

There are many more Jews players in the major leagues now than when you played. At that time, did you feel pride in, or a connection to, some of the other Jewish players? Was it important for you to be identified as a Jewish player?

Scheinblum: I’m very proud to be Jewish. Being Jewish is a link, and there were only five [then], so it was a special one: Art Shamsky, Mike Epstein, Steve Stone, Ron Blomberg, Ken Holtzman.

Holtzman is the only person, in my entire life – Little League, high school, college, minor leagues – to ever strike me out three times in one game! That’s something you don’t forget. It was that big curveball. I wasn’t a good loser.

What do you remember from growing up in the Bronx?

I was born at French Polyclinic Hospital, in Hell’s Kitchen [in Manhattan], and was raised in Ft. Apache, the Bronx. I remember watching baseball across the street, in Crotona Park. A really close friend of mine played there when he was younger: Rod Carew. Hank Greenberg played there, and [Rocky] Colavito played there, and I got to know them later.

My brother Bob and I would play in a little, fenced-in area, and out in the street. We’d play with broom handles and would throw to each other. We couldn’t get into the park – the fences were too high and we were just young kids. The [manhole covers] were bases. My mother was from Russia, and my dad was from the Bronx. I left the Bronx when I was eight years old.

You were accomplished in several sports.

I enjoyed being outside and playing each of the sports. I was followed by scouts when I was young. At an Old-Timers Game, the great Buck O’Neil sat with me and said, “Did you know that I scouted you in Little League?” I said, “Come on! That’s not true.” He said, “I got a phone call, saying that there’s a midget in Englewood, N.J., who hit home runs.” When I was 12, I was 4’6” – smaller than all the eight-year-olds. There were 21 homeruns hit in the Englewood Little League, and I hit eight of them. I didn’t really start growing until midway through college. Allie Reynolds’s son, Jimmy, was our [Little League team’s] first baseman. From what I understand, Bill Parcells played in our league also when I did.

Please tell me about the coach in your Little League who was responsible for you becoming a switch hitter – the female coach.

Her name was Janet Murk. She played second base for our high school team years before, and played in the [All-American Girls Baseball League] under the name Janet Jacobs. I think Janet lives in Pittsburgh. She was the coach of my Little League team when I was nine years old, and had confidence in me. She was very nice, very instructive. She could hit. At nine years old, I was the starting shortstop. It took a lot of chutzpa [for her] to put a nine-year-old on the team with 12-year-olds. When you’re young and playing, you don’t know whether you’re good or not good. You need other people to tell you. I had a good arm and I could run.

You played in the majors not only with some great players, but for managers who were great players: Ted Williams, Bob Lemon, Alvin Dark.

I played with some great, great players: Johnny Bench, Pete Rose, Nolan Ryan, Frank Robinson. I played with Lou Piniella for five years: in Cleveland, Kansas City and in Triple-A Portland. Of all the players I played with, I can’t think of any bad ones. They were all nice people.

Everybody. I stay in touch with Ron Blomberg and Mike Epstein. Mike and I were roommates on two different teams. Ron and I call each other every other month. He is so much fun to be with. I didn’t play with Ronnie; I played against him.

It’s interesting that of all the players, you’re closest with two other Jewish guys.

There were only about five in all the years I played, and I’m including [Sandy] Koufax, who’s really a class act.

When you were with the Royals in 1972, after the Israeli athletes were killed in Munich at the Olympics, you wore a black armband in identification.

Yes, I did. Besides being Jewish, they were athletes and human beings. I just wanted to let people know that I felt for the situation and that I was horrified. I wanted to be singled out as someone who really cared. 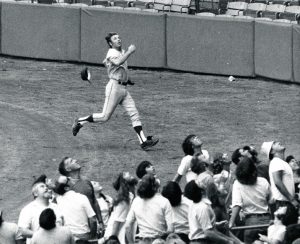 The last two weeks, I dropped about 20 points. That wasn’t fun. Somebody wrote me a letter last year, saying that if I had more than 200 at bats, I hit .300, no matter where I played – and that if I had less, I couldn’t hit above .200. I couldn’t hit in cold weather, for some strange reason. I needed to play every day – and when I didn’t, I had some problems.

I hit .328 for the Angels [in part of 1973]. I do know the secret to hitting: It’s who’s hitting behind you. In Kansas City, I hit third and had [John] Mayberry hitting fourth and Piniella hitting fifth. With the Angels, I hit second; I had Mickey Rivers hitting in front of me and Frank Robinson hitting third.

What accounted for those two seasons that clicked for you?

Playing, for one thing. It’s very difficult to put a good season together when you’re not playing. I was a streak hitter, and had a little bit of an upswing. When my timing was good, I could hit; when my timing was bad, I had my problems. 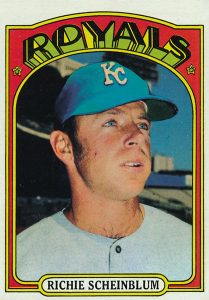 What was going well for you in 1972, when you made the All-Star Game?

I was leading both leagues in hitting at the All-Star break. Like anything in sports, when you’re doing well, your confidence is at a high. Sometimes, the ball looks like a balloon. Sometimes, it looks like a golf ball.

What do you remember of playing for Ted Williams at Washington in 1971?

I didn’t play that much. I started off not doing very well, mostly sitting on the bench and pinch hitting. I got sent down to Triple-A, and Ted ultimately said that was the biggest mistake he ever made, because I was hitting .414 [for Denver] with two weeks to go in the season. I wound up at .388, and he said during the season that he preferred me being on the big team.

Do you think the Senators gave up on you too soon?

Yes. I enjoyed [Williams]. I enjoyed his presence. I would have liked to play more. If that wasn’t going to be the case, then I certainly understood. I wasn’t upset with him. I don’t know if it was his decision or not.

Did you two have conversations about hitting?

It was mostly me listening to him. He told me to sit on the outside pitch, because I tried to pull it. I said to him, “Ted, that outside pitch is a ball to you and it’s a strike to me.” I think he understood. I very much enjoyed playing for him. I wish I could have done better. I got one card from somebody to sign, and it said that Ted broke down my entire career in the big leagues and found that if you took out my statistics for April, I hit .314 for my career – but, again, you have to include April.

What if you’d played for a warm-weather team, like the Angels, earlier in your career?

I think it would’ve made a big difference.

What was it about playing in cold weather that bothered you?

If I hit a ball at the end of the bat, my fingers swelled up. It was probably more psychological than anything else.

When I was a kid, my brother David and I were eating dinner after school and had the TV on. A game show came on, and our ears perked up when we heard the announcer say that one of the contestants was Richie Scheinblum.

I won’t say his name, but somebody just signed a contract and will now make $10,000 for every pitch he throws next year. Ten thousand dollars every pitch – that’s phenomenal. If it was me, I’d ask for my money after every pitch!