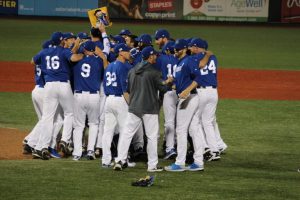 A historic moment looms for Team Israel: Its first-ever games in the World Baseball Classic in Seoul.

Here is the schedule. Set your alarm clocks accordingly:

Games will be broadcast online on the World Baseball Classic website and on MLB TV.

Jamey Vinnick of Scout.com has a preview of Team Israel. He writes:

Israel’s first appearance at the World Baseball Classic could be an interesting ride for many players. With a roster full of borderline MLBers, Israel has one of the weaker rosters in the tournament, but with a fairly weak pool around them they have a chance to make some noise. Netherlands is the clear favorite to win Pool A, behind Xander Bogaerts, Jonathan Schoop and Kenley Jansen, but with South Korea and Chinese Taipei’s fringe roster, Israel has a legit chance to battle for a runner-up spot in Pool A.

Elli Wohlgelernter provides an interesting overview of the team in the Jerusalem Post.

TEAM ISRAEL is like no team the players have ever played on. As professionals, they are used to shuffling from one franchise to another, making friends and then moving on, as they have all done in their careers. Here, it is a permanent team. No one’s traded or released: if you can still play, you’ll keep playing, and if you retire, you remain part of the family. In the world of professional baseball, that’s a very small family.

“I grew up as a Jewish kid in Santa Monica playing baseball with other Jewish kids,” says Cody Decker, a 30-year-old catcher with the Milwaukee Brewers organization. “But the higher you get in the ranks, there’s less and less Jewish baseball players to the point where other than on this team, I’ve been teammates with only two Jewish players in professional baseball over the last eight seasons.”

The result, he says, is something unique, “this thing we have in common and no one else gets to experience that. That’s why this is pretty special.”

Is it a good baseball team? Yes. Can the total be greater than the sum of its parts? Absolutely. And the parts are pretty impressive.