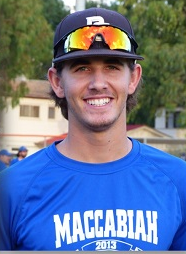 While Dean Kremer was raised in the United States, his parents  are Israeli. He and his family make annual trips to Israel, where thanks to being fluent in Hebrew, Kremer feels very much at home.

That’s why 6-foot-3-inch pitcher can’t wait to represent Israel during its World Baseball Classic qualifying games this week in Brooklyn. Only 20, he will be the youngest player on the team.

“This is the real dream,” Kremer said. “I’ve wanted to play for this [WBC] team a long, long time, to represent Israel.”

The righthander, who is from Stockton, Cal., made news in becoming the first player with Israeli citizenship to be drafted by a Major League Baseball team. It actually happened to him twice.

After San Diego Padres took him in the 38th round in 2015, he opted to play at the University of Nevada, Las Vegas. Last spring, the Los Angeles Dodgers drafted him in the 14th round.

Kremer picked up the game as a child in America, and has excelled at it – including by helping to raise Israel’s baseball profile internationally. He led its “C pool” team to the 2014 European championship in Slovenia. That vaulted Israel to the “B pool” in 2015 in Vienna, where it finished in third place. In both tournaments, Kremer received the best-pitcher award.

This season, Kremer began with the Dodgers’ Rookie League team, the Ogden (Utah) Raptors, before being promoted to their low-A team, the Great Lakes Loons, in Michigan. He posted an overall 2–1 record as a starter and a reliever, with a 2.27 earned run average, and struck out more than one batter per inning.

“God knows there are a lot of great Jewish players. For him to be one of the athletes in the group is a great honor for him, and for us, as Israelis,” Adi Kremer told JBM about his son’s selection for the WBC team, which is composed almost entirely of top American Jewish players. “He loves Israel, and is just all about Israel.”

The JBM interviewed the younger Kremer by telephone the day after the Loons clinched their first-round series against the Bowling Green Hot Rods and prepared to host the West Michigan Nightcaps that night in the round-two opener. The Loons went on to win that series and the next one, too, to capture the Midwest League championship.

Being the first Israeli whom a major league team drafted is “a way to try and grow baseball and develop it further in Israel – to [show] that somebody can do it.”

Kremer said that his father “talks to me after almost every outing. It makes me go back and think about what I was thinking [in a situation].”

Visiting Israel is “like being at home. I speak Hebrew, so there’s no difficulty for me. There’s no adjustment.”

Representing the United States one year and Israel the next year is “pretty cool, pretty special. It’s all fun. I get to play a game and represent a country – two countries. It’s always fun to get to play. It still strikes me as weird, different.”

What are you looking forward to in the World Baseball Classic this week?

I can’t wait to see some guys from the national team: Shlomo [Lipetz, pitcher], Tal [Erel, bullpen catcher] and Alon [Leichman, bullpen coach]. With Alon, at UNLV, we played San Diego State [Leichman pitched for the University of San Diego], and I got to see him. I talk to Tal – we FaceTime and text – all the time. He’s definitely one of my closest friends.

Are there other things you’re anticipating in that experience?

I don’t know, but I’m excited to find out.

What does being the first Israeli to be drafted by a major league team mean to you?

I’m extremely honored. It’s a great opportunity for me to take advantage of and to do something great. It’s a way to try and grow baseball and develop it further in Israel – to [show] that somebody can do it. I’ve seen kids in Israel grow the last few years in the baseball camps I’ve worked in. They’re asking me questions. They see that it’s possible. They have somebody to look to.

Are the Israeli players contacting you the adults or the kids?

Mostly the guys from the national team, but also kids. The kids are all stat freaks. If I have a not-so-great game, they’re, “What happened?” Sometimes, I get asked for advice: hitting and sometimes pitching, mechanics. I like that. I love helping.

I’m guessing that your parents, coming here from Israel, didn’t know much about baseball, so how is it that you gravitated toward the sport?

My parents didn’t know what baseball was until they got to the States. My dad, Adi, got a tennis scholarship to the University of the Pacific. My mom, Sigal, came with him, and she went to school here, too. They settled in Stockton, where the university is, after graduation – actually, it was my dad’s last year of school. When I was four or five, we lived next to a Little League field. My dad, after he finished with tennis, didn’t want to be anywhere near the court. That’s what made me start [in baseball]. I might have played tennis. It was always baseball in the spring and soccer in the fall.

They must have figured out baseball by watching you play.

They learned it as I learned it. I remember when I was in the majors – the oldest kids in Little League. He was able to coach me then – he was an assistant coach. In T-ball and in the minors, I don’t remember him being involved. He’s not big on the mechanical side. He’s big on the mental game, the body language. He talks to me after almost every outing.

Does that help you?

It makes me go back and think about what I was thinking [in a situation]. It’s the minor things. When I throw, most people don’t see what he sees. I don’t show much emotion at all when I pitch, from what people have told me. He’s an extremely intelligent individual.

What was your job while coaching in the Israeli baseball camps?

I did it for two years: 2014 and 2015. There were four age groups, and they divided the coaches up: two or three per age group. We worked on different fundamentals every day. There were two different camps, for two weeks each, every day except Saturday. One was in late June, and one in August.

It’s fun teaching the game, especially when they’re so willing to learn. I usually worked with the older groups or with the younger national-team groups. They watch big-league games all the time. They know baseball.

Who do you stay with when you are in Israel?

Everyone. All my grandparents are there: in Tel Aviv and in Rishon [L’Tzion], which are close to each other. Everyone is in Israel – the only ones who aren’t are my immediate family.

Did you visit Israel often as a child?

When we were younger, we went twice a year: during the summer and during winter break. When school got more serious, in high school, we went for longer periods in the summer, but stopped going in the winter. In the last few years, it was for a month.

How does it feel when you’re in Israel?

It’s like being at home. I speak Hebrew, so there’s no difficulty for me. There’s no adjustment. I have friends I grew up with, and now some from baseball.

What was it like to play on the U.S. team in Israel at the Maccabiah and then be recruited by Israel to play on its team the next summer in the European championships?

It’s pretty cool, pretty special. It’s all fun. I get to play a game and represent a country – two countries. It’s always fun to get to play. It still strikes me as weird, different.

The way I feel about that [being drafted] is more like the American kid who got drafted.

The only thing bigger, I guess, would be if a player produced through the Israeli baseball system were to be drafted.

That’s my goal – to make something like that possible.