A grandson of Holocaust survivors, Kowitz attended Clemson University, where he put together a superlative senior season, batting .403, launching a 37-game hit streak and stealing 34 bases in 66 games. The Baltimore native was selected by the Atlanta Braves in the ninth round of the 1990 amateur draft. He spent the next five years in the Braves’ minor-league system until David Justice was sidelined with an injury and a big-league opportunity was finally presented. Kowitz doubled in his first major-league at-bat and saw steady action over the course of the next 10 games, in which he managed to play all three outfield positions. His debut double was his only extra-base hit, and he ended up batting .161 before being sent down. Kowitz spent the ensuing four years playing at the AAA level for both the Tigers’ and the Blue Jays’  organizations before joining an independent league for a single season in 2000. His contribution to the Braves during the 1995 season earned him a World Series ring. 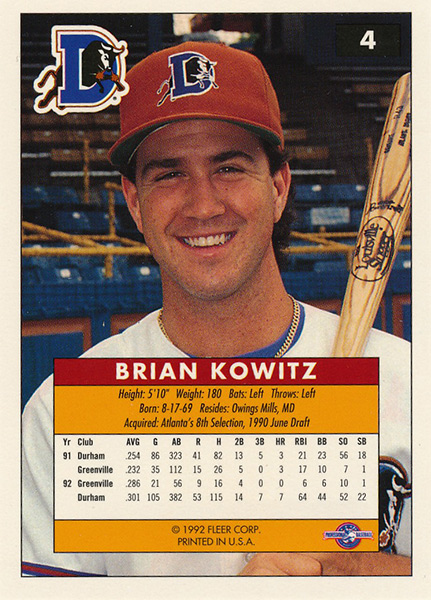 At Clemson, Brian was selected as the 1990 Atlantic Coast Conference Player of the Year.