A native of Santa Monica, Calif., Max Fried dominated in high school. He wore No. 32 in honor of Sandy Koufax. He was named the 2011 So Cal Jewish Sports Hall of Fame Male High School Athlete of The Year.

Fried was selected by San Diego as the No. 7 overall pick in the 2012 MLB Draft. By 2014, he was ranked as the Padres’ top pitching prospect. However, he was injured most of the year and eventually underwent Tommy John surgery.

After the season, he was part of trade that sent him to Atlanta. He spent all of 2015 on the sidelines recovering from surgery.

Fried returned in 2016. He was called up to the Braves on Aug. 5, 2017. He debuted on Aug. 8, throwing two scoreless innings against the Philadelphia Phillies.

In 2020, he won a Gold Glove Award as the top-fielding National League pitcher. He won the award again in 2021 as well as a Silver Slugger Award as the NL’s best-hitting pitcher.

He was the winning pitcher in Game 6 of the 2021 World Series, in which the Braves clinched the title with a 7-0 victory over Houston. Fried pitched four-hit ball over the first six innings, striking out six and walking none. 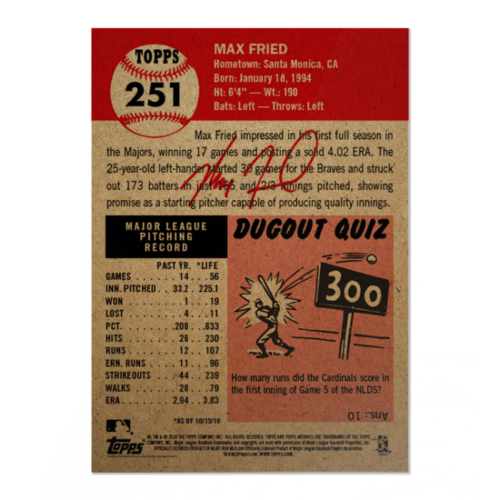 Even through he began the 2019 season in the bullpen, Fried’s 17 wins were the second-highest in the National League.