A standout pitcher at California Lutheran University, Hirsh was selected by the Houston Astros in the second round of the 2003 amateur draft. At the time, he was the fourth-highest draft pick ever to hail from a Division III school. By 2005, he was the Texas League Pitcher of the Year, MVP of the Corpus Christi Hooks and a Baseball America Double-A All-Star. The following year, he was named the Pacific Coast League Pitcher of the Year, making him the first player to win both pitching awards in back-to-back seasons. Hirsh made his debut with the Astros on Aug. 12, 2006, and started nine games over the remainder of the season. That year he was also named the starting pitcher for Team USA in the MLB All-Star Futures Game. He was traded to the Colorado Rockies in the off-season and broke camp with the major-league club in 2007. He started 19 games that year, but had his leg broken by a line drive off the bat of J.J. Hardy and he ended up on the 60-day DL, which cut short his opportunity to play in a World Series. The following season he was bitten by the injury bug again, this time when he damaged his rotator cuff in spring training. He saw limited action as a September call-up later that year, but began the 2009 campaign at Colorado Springs and was soon traded to the New York Yankees’ organization. He spent the next two years at Scranton/Wilkes-Barre before joining the Australian Baseball League in 2011. After retiring from professional baseball, he opened the Jason Hirsh Pitching Academy in Denver. 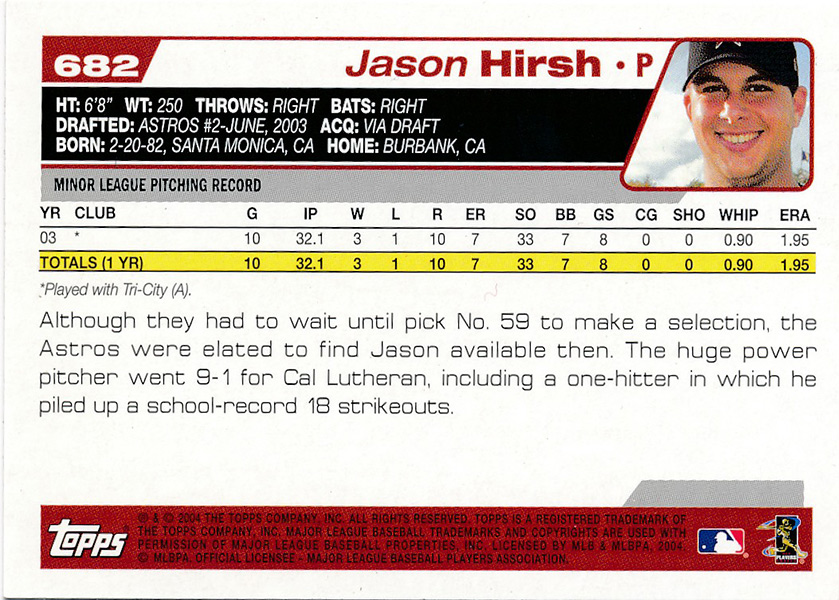 Pitching for Triple-A Round Rock in 2006, Jason pitched a shutout against Albuquerque, allowing just a third-inning single by the opposing pitcher.