Morrie “Snooker” Arnovich, who kept kosher his entire life, made the All-Star team as a member of the 1939 Philadelphia Phillies, a year in which he hit a robust .324 with five homers and 67 RBIs. On Sept. 21, 1941, as a member of the New York Giants, Arnovich appeared in a game in which the lineup featured an all-time record four Jews. In addition to himself in left field, the Giants’ starting nine included Harry Feldman (P), Harry Danning (C) and Sid Gordon (CF). The Giants, with their Jewish plurality, defeated the Boston Braves, 4-0. As a member of the Cincinnati Reds, Arnovich enjoyed one at-bat in Game Four of the 1940 World Series against Hank Greenberg and the Detroit Tigers. 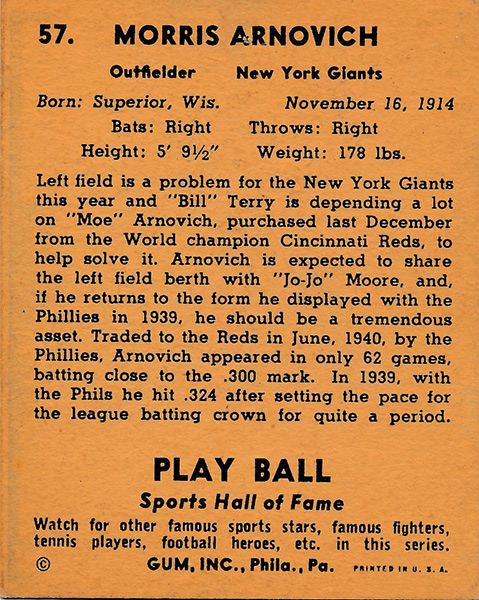 Upon his induction into the U.S. Army in 1942, Pvt. Arnovich was assigned to Fort Lewis, Wash., where he was named manager of the military base’s team. Morrie assembled one of the first modern-day integrated baseball teams to play on U.S. soil, which  drew the attention of future commissioner A.B. “Happy” Chandler.