Born Samuel Arthur Cohen, Bohne was persuaded by the Cincinnati Reds’ front office to change his last name because they believed his Jewish last name alienate the largely German fan base where he played. A speedy infielder who liked to steal bases, Bohne broke up Dazzy Vance’s no-hitter on June 17, 1923, with two outs in the ninth inning. That same year, he was falsely accused by a sports magazine of conspiring with gamblers to throw a series to the New York Giants. He and a teammate successfully sued the magazine for libel. Bohne finished his career in 1926 as a member of the Brooklyn Robins (as they were then briefly known). 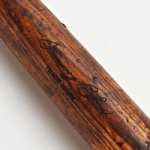