A native of Brooklyn, N.Y., Rogovin began his professional career as a power-hitting infielder, but was converted to a pitcher while playing for the Chattanooga Lookouts of the Southern Association in 1945. A well-known Jewish umpire, Dolly Stark, had seen him play and compared him to Hank Greenberg, but Rogovin replied that the only thing he had in common with Hank Greenberg is that “we are both Jewish.” His path to the major leagues was long and tortuous and even included a brief stint in jail after he walked several batters while pitching with a sore arm one day while playing winter ball in Venezuela. He finally reached the big leagues with the Detroit Tigers in 1949, but continued to be bothered by arm trouble and was sent back to the minors. Early in the 1951 season he was placed on waivers and claimed by the Chicago White Sox, whose manager, Paul Richards, had coached him in the minor leagues. Converted to a full-time starter, Rogovin pitched successfully and finished the season with an American League-leading 2.78 ERA. Although he posted a 12-8 record, seven of his eight losses were by a single run and the eighth loss was by two runs. The return of arm soreness limited his effectiveness over the ensuing several seasons, and he was never able to recapture his 1951 magic. He was traded to the Cincinnati Redlegs after the 1953 season, but never saw major league action with the team. He returned to the major leagues in 1955 with Baltimore Orioles, but he consistently struggled and was released mid-season. He signed with the Philadelphia Phillies and pitched a few more seasons before retiring. During the 1954 offseason, he married Doreen Lipsit at Rodeph Shalom Temple in New York. After his playing days ended he earned a college degree in English literature and became a public school teacher who specialized in teaching the poems of Langston Hughes and the novels of John Steinbeck. 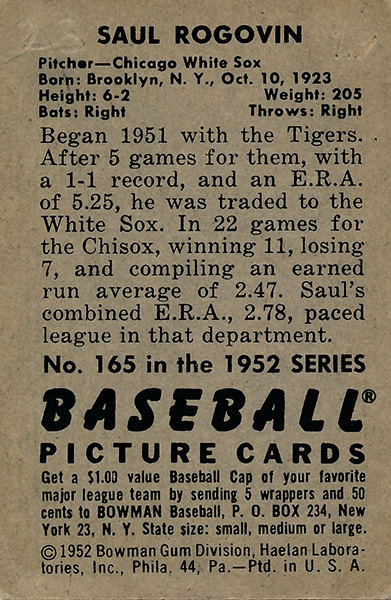 Rogovin suffered from a sleeping disorder and was often found sound asleep in the clubhouse during games.