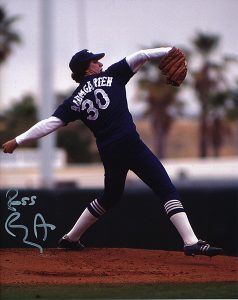 Ross Baumgarten had a rapid rise to the big leagues. Unfortunately, he also had a quick premature ending, as an arm injury forced him to retire at the age of 27.

However, the former White Sox stayed around long enough to establish himself as a solid pitcher; he was fourth in American League Rookie of the Year voting in 1979.

(Here is the link to his JBM player page)

Along the way, Baumgarten also collected plenty of memories, including facing the Yankees and Reggie Jackson as a pitcher for the University of Florida. He shares them here in a JBM interview.

On admiring Ken Holtzman: “I’m not going to say it was because he was Jewish.  I never really identified like that.  But he was left‑handed, and he was good, and he wore his No. 30, which I wore almost my entire career, and my phone number is 3030.”

“I was at home pitching (for the White Sox) in front of family and friends.  That to me was what was neat about it. What I’ve come to learn, I didn’t know it at the time, but that all these people that I did grow up with that I did play against in high school, that they were coming to the games to watch me pitch.”

On breaking in with Sox team that included Steve Stone and Ron Blomberg:  “Steve kind of took me under his wing.  I was only there for the last six weeks of the season, but he was very kind to me. And the other guy was Bloomy, Ron Blomberg, and he’s a character, and we were friendly.  I wouldn’t say that we were going‑out buddies, but they were both kind to me. 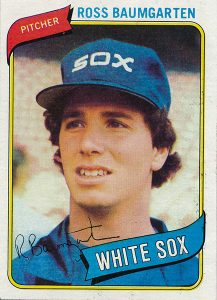 Is it true that you grew up as a Cubs fan?

Baumgarten:  I’m still a Cubs fan. I’ll give you my stock line: The only time I was a White Sox fan was when they signed my check.  That is the absolute truth.

I grew up in Glencoe.  I was a North Sider.  I was a die‑hard Cubs fan.  I remember having the Cubs-White Sox arguments on the school playground

I was the other side of the argument.

There were Sox fans that came from the South Side.  My dad actually was a Sox fan, so I don’t know how it happened, but I became a Cubs fan. I think it happened because in those days you could watch the Cubs in the afternoons.

Sure.  And they had some good teams.

They were actually kind of good in the ’60s, and Kenny Holtzman was just a natural for me to like.

Was that because he was left‑handed or was it the whole combination of him also being Jewish?

I’m not going to say it was because he was Jewish.  I never really identified like that.  But he was left‑handed, and he was good, and he wore his No. 30, which I wore almost my entire career, and my phone number is 3030.

Ironically, I got to meet Kenny in 1977.  He was on the New York Yankees, and in March of ’77, George Steinbrenner brought the Yankees to play the University of Florida.

You were a junior at Florida at the time.

Steinbrenner donated the money for the lights for our baseball team, and for the first night game, he brought the Yankees in.  I remember a million things about that night because obviously it was a big deal to us in college.

You pitched two innings in that game. What was it like to face the Yankees?

From day 1, I wanted to be a Major League player. This was a big deal to us. We were college kids. We had no idea. Your feeling is that these guys are Major Leaguers, and not only Major Leaguers, but they’re the Yankees. They don’t put their pants on one leg at a time.

So you’re wondering, you’re in college, how the heck are you ever going to get them out?  I pitched two innings, and I did kind of well. I think I gave up one earned run, and I got six outs.  After the game in the newspaper the next day, they asked Reggie Jackson what did you think of the team? He said, their first pitcher (Baumgarten) is definitely going to be a Major League pitcher.  I mean, that’s nice, considering that he hit a fly ball about 399 and a half feet, 400 with spin.

Take me back to that at‑bat.  The first time you’re facing Reggie Jackson.  Obviously he’s the big star of that era.

It was a heck of an experience.  That’s the bottom line. And I felt good about it coming out ‑‑ I guess it jumped my confidence even higher than it was, because the next game against Georgia I pitched really, really well.

You were drafted the following June in the 20th round, and then made the jump to the big leagues very quickly in 1978.

I’m not sure, but I think the only guy in that draft who made it before me was (Paul) Molitor.

I always had confidence in myself.  There was never an issue that I was not going to make it.  Whether I did or not, obviously, time was going to tell, but I was always going to keep pitching until people told me I couldn’t.

And you got the win?

I got the win.  I think Lerrin LaGrow got like a three‑inning save.  The first guy in the seventh got on and (manager Don) Kessinger took me out. I remember when I walked back to the dugout after he took me out, I happened to look up and the first row behind the dugout was (Sox general manager Roland) Hemond, my father and my brother.

When you came up in 1978, you were the third Jewish player on that team.  What was your relationship with Steve Stone and Ron Blomberg?

Yeah, Steve kind of took me under his wing.  I was only there for the last six weeks of the season, so you know, he kind of took me under his wing a little and was very kind to me.   And the other guy was Bloomy, Ron Blomberg, and he’s a character, and we were friendly.  I wouldn’t say that we were going‑out buddies, but they were both kind to me.

Chicago has a large Jewish community.  Did you ever have the sense of being a Jewish pitcher in a town like Chicago?

Not really, to be very honest. And it was just never my focus.  My focus was to be a ballplayer.

I was at home pitching for home in front of family and friends.  That to me was what was neat about it. What I’ve come to learn, I didn’t know it at the time, but that all these people that I did grow up with that I did play against in high school, that they were coming to the games to watch me pitch.  Even if we weren’t friends, but there was a little connection there.  They got kind of enjoyed that, too.

It all went well. I kept the team in the game, and it was fun, a lot of fun.

Tony LaRussa took over as manager at mid-season. How did you like playing for him?

I liked Tony. I do remember one time he came in the locker room after I pitched a good game, and he said, “Nice game.  Just remember, you’re only as good as your next start.”  I said, thanks.  But that’s the way he was. He was always tense and it was always about the next game.

What do you remember from that ’79 season?  What stands out?

You had to feel pretty good about where your career was headed.

Right.  I was voted Sporting News’ rookie left‑handed pitcher of the year.  I felt like I knew what I was doing, and I could get it done.

Let’s just say it was tough.  The statistic of that year is of the 24 starts I had, we scored 25 runs when I was in the game.  I chuckle when I see guys now. They complain if they’re only getting two runs a game or 2 1/2 runs a game. I got one run a game for the entire season.

I didn’t handle it as well as I could have.  Unfortunately at the time we didn’t have any veteran pitching that could kind of guide me through it. I got negative.

You know, you learn. 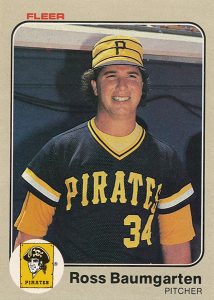 In 1981, the strike-shortened season, you pitched in 19 games. Then you get traded to Pittsburgh in 1982

I hurt my arm right away.  That was the end of me. Never pitched well again.  I don’t know what I did.  At the end of ’82, I went to see seven of the top doctors in the country, and I got like seven different diagnoses.   In those days it was totally different than now.  You know, there was no MRIs.

What was your thought process going forward?

I had watched (Francisco) Barrios come back from arm surgery, or try to, and it just ate him up, and it literally killed him (the former White Sox pitcher died of a drug overdose at the age of 29).

In those days we didn’t have guaranteed multiyear contracts, and I wasn’t prepared to spend more time in the minor leagues coming back. I came from a different background than a lot of kids, so I just figured, instead of going through that, I would just go on to the next thing.  That’s what I did.

Obviously you had got off to such a great start.  Was it hard to reconcile that it ended so quickly for you?

No, I didn’t sit at home and drink and get depressed.  I just sent my résumé, literally (at the end of the season) out to a bunch of brokerage firms, because that’s what I thought I could do. I got hired.  I’ve been doing this for 32 years now.