Kapler, who has a Star of David tattoo on one calf and the post-Holocaust motto “Never Again, 1933-45” on the other, had a notable career despite being only a 57th-round draft pick. He won the Southern League MVP award in 1998 at Jacksonville and was named Minor League Player of the Year by The Sporting News, Baseball Weekly and USA Today. He began his 13-year major-league career with the Detroit Tigers in 1998 and was traded to the Texas Rangers after the 1999 season. He hit two homers on Opening Day in 2000 and later that season had a Texas team-record 28-game hitting streak. In 2004, Kapler was in right field in the ninth inning of Game 4 when the Boston Red Sox clinched their first World Series since 1918. After an unsuccessful year playing in Japan, he returned to the major leagues with Boston, Milwaukee and Tampa Bay. In 2015, he was named the Dodgers’ director of player development.

Kapler managed the Philadelphia Phillies to a 161-163 record from 2017 to 2019.  After being dismissed by the Phillies, Gabe was named the 37th manager of the San Francisco Giants for the 2020 season. In 2021, he was named National League Manager of the Year after leading the Giants to a franchise-record 107 victories. 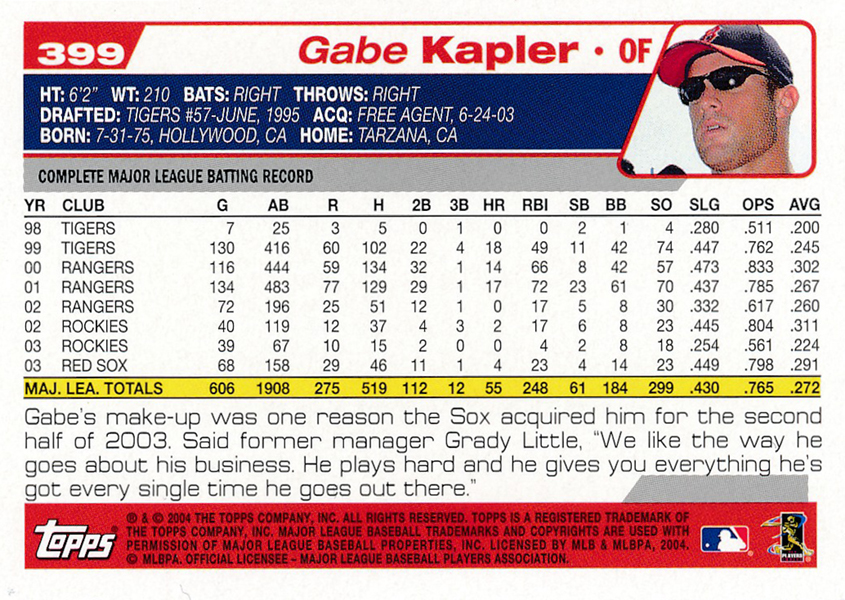 After his playing career and before moving into front-office positions, Gabe was an analyst for Fox Sports 1 cable network and also was a writer and analyst at Baseball Prospectus, which is devoted to sabermetric baseball analysis.