After tossing two no-hitters for his high school team in the Bronx, Feldman (aka, “Hank”) tried out for the New York Giants and pitched impressively enough to earn a minor-league contract. He worked his way up to the majors and saw steady action during the war years (the armed forces turned him down because he had tuberculosis as a child), but he defected to the Mexican League in 1946 and never made it back to the majors. On Sept. 21, 1941, he appeared in a game in which the lineup featured an all-time record four Jews. In addition to himself on the mound, the Giants’ starting nine included Morrie Arnovich (LF), Harry Danning (C) and Sid Gordon (CF). A lifelong music enthusiast, Feldman purchased and operated Elmore’s Records in Fort Smith, Ark., after his playing career ended, but he died of a heart attack at age 42 while boating on Lake Tenkiller in Oklahoma. 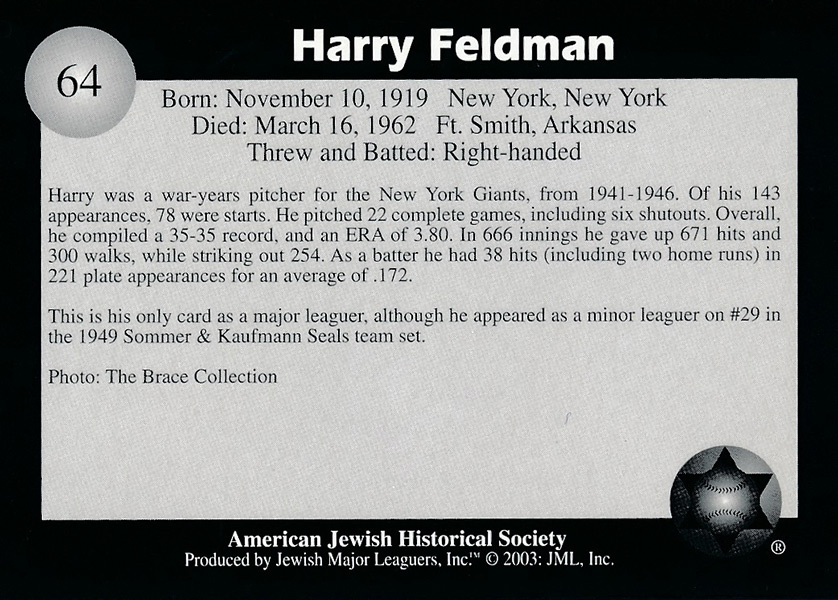 On Sept. 10, 1941, Feldman and catcher Harry Danning of the Giants became the first Jewish battery in major-league history in a game against Pittsburgh.