Jews such as Lipman Pike, Barney Dreyfus, and Albert Von Tilzer
had profound impact on the early days of baseball.

Baseball's Moses
With mass immigration, Jews begin to make their marks in America. That includes baseball, as a Jewish player was one of its first big stars. Also, a Jewish owner had a profound influence in shaping the direction of the game, and a Jewish composer wrote a familiar tune about going to the “ballgame.”
Notables

LIPMAN PIKE
It all started with Lipman Pike. Pike was the first Jewish star and arguably the game’s first professional player. Accepting $20 a week to play third base for the Philadelphia Athletics in 1866, Pike became a professional. Other top players soon followed suit, and within three years, the first all-pro team was born in Cincinnati. In 1871, the National Association was formed as the first professional baseball league, and Pike joined the Troy Haymakers for its inaugural season. He was their star, batting .377 (6th best in the league) and hitting a league-leading 4 home runs. Pike often was the top power hitter during an era when 4-6 homers in a season was considerable formidable. There is a group trying to push for Pike’s entry into the Hall of Fame.

BARNEY DREYFUS
The owner of the Pittsburgh Pirates from 1899-1932 who was known for his high integrity and passion for the game. He was instrumental in helping to create the World Series, with the first one taking place in 1903. Dreyfus sensed fans would want to see a championship between the two leagues. In 1909, Dreyfus built Forbes Field, a classic ballpark. In the wake of the Black Sox scandal, he advocated for a commissioner to govern baseball. He was a key person in Kenesaw Mountain Landis getting the job. In 2008, he was inducted into the Baseball Hall of Fame.
ALBERT VON TILZER
He composed the music for “Take Me Out to the Ballgame.” After the “Star Spangled Banner,” Tilzer’s song is the most often played in the U.S.
BARNEY PELTY
He was a quality pitcher for the St. Louis Browns from 1903-12 with a great nickname: “Yiddish Curver.” Unfortunately for him, he played for a lot of bad Browns teams. Pelty’s career record of 92-117 wasn’t reflective of his talents as a pitcher. In 1906, he went 16-11 with a 1.59 ERA.

ANDY COHEN
Desperate to sign a Jewish player to help the Giants compete with the Yankees in attendance in the 1920s, manager John McGraw eventually turned to a Cohen, a promising infielder. Cohen was the Giants’ starting second-baseman in 1928, and was carried off the field by excited fans after enjoying a big game. Alas, that game proved to be the peak for Cohen, who never played in the big leagues after 1929.
They said it

Based on career statistics alone, Pike deserves to be in the Baseball Hall of Fame. His statistics are even more impressive if you factor in the prejudices of his day that he had to overcome. But beyond mere numbers—as the first professional baseball player, and the first Jewish player, manager and umpire—Pike was a pioneer, and baseball’s Hall of Fame is the place for pioneers.

They know him as one of the 'big' men of baseball, as a leading club-owner in the grand old National League, as one of the best judges of a baseball player in the business, as almost a friend (for his knowledge) of the game.

McGraw made a big fuss (about Cohen being a Jewish player), but don’t forget that he was interested in getting any kind of a good ballplayer. He didn’t care what he was. The fact that I was a Jew made the icing even sweeter. 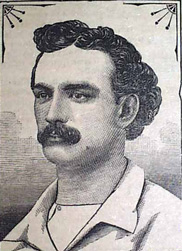 Lipman Pike of the Philadelphia Athletics hit six homers, including five in a row in a 67-25 victory over the Alert Club of Philadelphia.
Lipman Pike, only 25, becomes the first Jewish major league when he debuts with the Troy Haymakers in a 9-5 loss to Boston Red Stockings.
Barney Pelty of the Browns pitches first of three straight shutouts in 3-0 win over A’s.
Barney Pelty becomes the first Jewish pitcher to draw an opening day starting assignment. The Browns beat the Cleveland Naps 2-1.
The Phillies’ Erskine Mayer loses a 2-1 decision to Boston in Game 2 of the World Series.
Andy Cohen gets three hits, two runs scored and two RBIs in Giants 5-2 win over Boston Braves on opening day.
Facts and figures
Among the teams Lipman Pike played for were the Brooklyn Atlantics, Philadelphia Athletics, Lord Baltimores, Troy Haymakers, St. Louis Brown Stockings, Cincinnati Red Stockings, Hartford Nutmegs, and the original New York Mets.
Also known for his speed, Lipman Pike once raced and beat a famous trotting horse named "Clarence" in a 100-yard sprint (in 10 sec­onds flat), winning a $250 prize.
When Barney Pelty of St. Louis Browns threw a 1-hitter against White Sox in 1904, his catcher was Branch Rickey.
Erskine Mayer, traded in 1919 to the Chicago White Sox, quit baseball in disgust after the infamous Black Sox gambling scandal was revealed.