A Detroit slugger and a catcher-turned spy make their impact on the field and on the battlefield.

Baseball's Moses
This was an important period for Jews in the U.S. They were trying to get accepted and integrated into American life. They also had to deal with the anti-Semitism here and in Europe. Along came Hank Greenberg, a baseball superstar who gave Jews a rallying point and a feeling that they did indeed belong too.
Notables 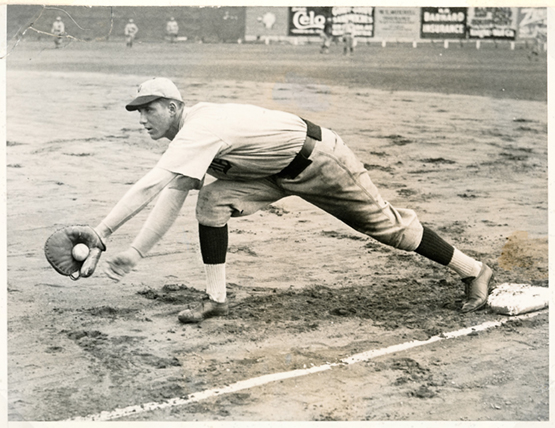 HANK GREENBERG
The first Jewish superstar and arguably one of the most important Jews in the 20th Century in the U.S. Greenberg covers the spectrum as an immense symbol of pride for Jews; overcoming anti-Semitism; and maintaining Jewish rituals for the High Holidays. During the ’30s, Greenberg ranked with Lou Gehrig and Babe Ruth as the best players in the game. He nearly broke Ruth’s home run record when he hit 58 in 1938. In the 1940s, he made his mark in another way when he became the first Major Leaguer to enlist in the U.S. Military during World War II. Rising to the rank of captain, he led the way for countless other players joining the Armed Forces. Greenberg didn’t return to baseball until 1945. 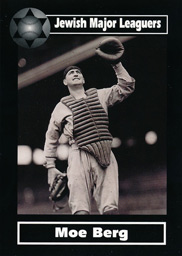 MOE BERG
Berg had an extraordinary double life. He was a mediocre catcher who also served as a spy for the U.S. prior to and during WWII. During a baseball tour of Japan, he secretly filmed Tokyo’s skyline from the roof of a hospital. His shots were used in Jimmy Doolittle’s air raids of the city. During the war, Berg became a spy based in Europe, executing critical missions for the U.S. In one mission he parachuted into Nazi-occupied Yugoslavia to meet with resistance groups and determine which ones merited American aid. In another mission he attended a lecture given by German nuclear scientist Werner Heisenberg in Switzerland. 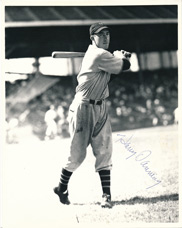 HARRY DANNING
Danning became the first Jewish star to play in New York. The catcher was a four-time All-Star for the New York Giants from 1938-41. During that span, he hit over .300 three times and finished in the top 10 in MVP voting twice. 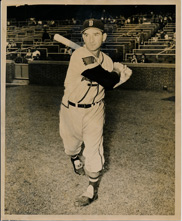 SID GORDON
After returning from the service, Gordon became a standout player for the New York Giants. An outfielder, he was selected to the 1948 and 1949 National League All-Star teams. He hit 202 homers during a career that stretched to 1955. 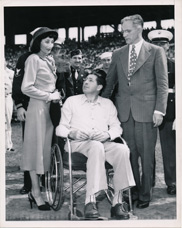 SI ROSENTHAL
An outfielder with the Red Sox for two years in the ’20s, Rosenthal, who served in World War I, enlisted at the age of 39 to serve in World War II. While serving, he learned his 17-year-old son had been killed in battle. Shortly thereafter, Rosenthal’s boat hit a mine and he was paralyzed from the waist down. Yet despite his condition, he devoted his life to numerous charity campaigns.
SAM NAHEM
A pitcher for the Cardinals, Nahem was sent overseas in late 1944, and served with anti-aircraft artillery. After the cease of hostilities in May 1945, Nahem, promoted to sergeant, was running two baseball leagues for servicemen in Rheims, France. He was also managing and pitching for his own team – the OISE All-Stars, a team made up of mainly ex-minor league players supplemented by Negro League stars Leon Day and Willard Brown.
They said it

Berg made himself unique so comparisons were impossible.

-Harry Danning
Memorable Moments
Moe Berg sets an American League record by playing in his 117th game without an error.
Light-hitting catcher Moe Berg joins a group of All-Stars on a tour of Japan. He secretly takes photos of the Tokyo skyline, which became useful during the war.

For the third time in four games, Hank Greenberg hits two homers in a game, giving him 35 for the season.
Hank Greenberg hits his 50th homer of the year against the White Sox.
In a doubleheader against Cleveland, Greenberg fails to hit a homer, leaving him with 58 for the season, two short of Babe Ruth’s 60.
Harry Danning hits for the cycle, and he remains the last player to have accomplished that feat by virtue of an inside-the-park home run.
Hank Greenberg hits a homer in his final game before entering the service. He won’t play again until 1945.
Harry Danning, Morrie Arnovich, Sid Gordon and Harry Feldman start for Giants. It is the first time ever that a starting lineup includes four Jewish players. 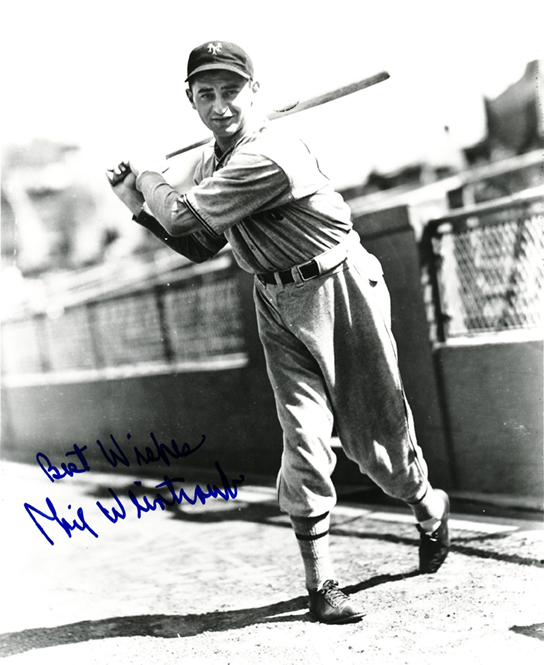 Phil Weintraub drives in 11 runs with two doubles, a triple and a homer in the Giants’ 26-8 win over the Brooklyn Dodgers.

Hank Greenberg homers in his first game back from the war.
Hank Greenberg’s grand slam against St. Louis on the final day of the season clinches the pennant for the Tigers.
Facts and figures
With a .325 batting average and 126 runs scored, outfielder Goody Rosen of the Brooklyn Dodgers finished 10th in the MVP voting in 1945.
In 1935, Hank Greenberg had 103 RBIs at the All-Star break, a record that stands to this day. He did not, however, make the All-Star team!
Hank Greenberg also excelled in the World Series. He hit .318 with 5 homers and 22 RBIs in 23 World Series games.
Even though he played for the hated Giants, the Dodgers once had a day to honor Sid Gordon, who grew up in Brooklyn.